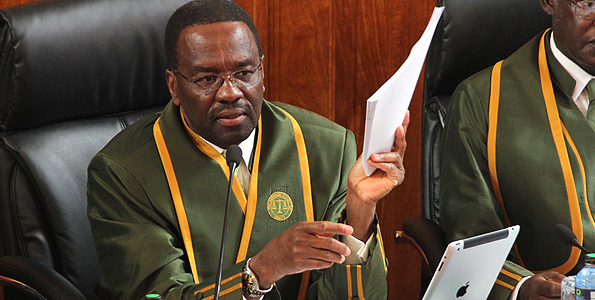 The new constitution we promulgated in 2010 carried with it a lot of hopes. It came just in time after several years of numerous attempts to get rid of that archaic, draconian, punitive and oppressive old constitution we inherited from our colonial masters. Though, it was later modified by Kenyatta and Moi to suit their selfish interests.

That old constitution which the successive KANU governments, its sympathizers, its beneficiaries and loyalists defended and worshiped like a â€œgodâ€ carried with it all the hallmarks of an oppressive piece of law. They kind of immortalized it.

In fact, the tyrannical regimes commanded by Jomo Kenyatta, Daniel Moi and Mwai Kibaki cowardly thwarted efforts by our gallant heroes to rewrite the document. The change champions met with the full force of the partisan police force who unreasonably unleashed terror on them. Their blood was however not shed in vain. I salute them all.

The executive used police as its private property. It was even more of a family attack dog used to scare and scuttle dissenting voices. Sadly, even after being tortured, maimed, some pressed in the balls and some even killed by the state police, our judiciary was a no go zone for any right thinking mind.

This institution was highly compromised, corrupted and could not deliver any shred of justice to victims of oppression. Anything justice belonged and was controlled by the rich land grabbers of the state, power brokers and the high and mighty. The whole institution of judiciary was under armpits of the supreme president.

This is the reason Kenyans passed the new constitution currently in operation. Our desire was the much needed reforms in various public and vital institutions like the judiciary among others. Contrary to our expectations, this institution has succeeded in nothing but to deepen our hopes in a reformed judiciary.

It is as if we have rolled the wheel of reform in the judiciary backwards. The much hyped reforms and restoration of public faith in the judiciary has stagnated longer than expected. Instead of involving himself in tangible acts that will reform the judiciary, the JSC has perfected the art of cowardice.

They â€“ led by the timid and gullible Dr. Willy Mutunga â€“ have been engaged in side shows. Every time they appear in a press conference all you expect is desperate group trying to save its dwindling image. They always appear fighting an imaginary enemy. Either downplaying an allegation or responding to an attack from what they presume as hostile quarters.

They are engaged more in judicial activism than their core mandate. Dr. Willy Mutunga shouldnâ€™t expect to gain sympathy from the public through the cameras when we have a backlog of cases not yet handled.

We canâ€™t treat the judiciary with the respect it does not deserve when judges are accused of corruption, uncouth and underhand dealings reminiscent of the KANU regime. Respect is earned not demanded for free. Giving hectoring speeches and press releases can neither earn you neither respect nor bring you closer to being admired even by an ignorant populace â€“ which Kenya is short of.

It is high time the Chief Justice realizes that Kenyans will no longer be taken for granted. We need proper services from the judiciary. We need justice dispensed to those who deserve it. His assertion that we need to swallow any crap from that institution is ill informed, derogatory, undeserved and unwarranted.

He instead should rid the judiciary of corruption, tribalism, politics and control from state house. Coming to the lights of cameras guns blazing can never reform the judiciary. Talking tough in a dictatorship kind of tone is a crude way of doing it. With the level of oppression from the executive, we canâ€™t shoulder another burden from a dysfunctional and desperate judiciary.

Since we arenâ€™t idiots, we wonâ€™t swallow your idiotic commands. Never even think that we are ready for anything unconstitutional from you. We need the best not what you think is the best for us. Next time, please spare us the wrath of your angry looking faces, somehow thirsty for blood, and solve your â€œshitâ€ somewhere at the basement of the Supreme Court building out of the glaring cameras.

In case you want the court of public opinion to hear your case, please follow the correct procedure. But first, we need an explanation of your performance record since we introduced the new constitution before we even think of protecting you from the wrath of those â€œhostileâ€ quarters.

The writer comments extensively on topical issues and edited the book: Golden steps to your Hidden treasures