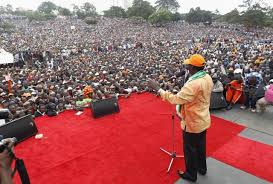 The government has banned all political gatherings in Nairobi ahead of CORD leader Raila Odinga return this weekend.

Save for the Madarak Day celebrations, the police claimed the security situation in the country does not allow the holding of large gatherings.

Reacting to Kimaiyo’s order, human rights activist Ndung’u Wainaina termed the order unacceptable and an affront on the constitution.

Yesterday evening after meeting of Judiciary and security organs leadership, Chief Justice Dr. Willy Mutunga Issued a short statement part of it reading, â€œTerrorism is war by unconventional means, but those of us who have sworn to protect and defend the Constitution must become more imaginative in fighting this war without compromising on the founding principles of our nation. There is no choice but to uphold all the Articles of the Constitution, meaning that the public interest of securing the State must not be in contradiction with the Bill of Rightsâ€.

David Kimaiyo was part of the meeting. This afternoon he had issued a decree suspending Bill of Rights. This is unacceptable. It is the continuous affront and obliteration of the Constitution. To explain the pressure Judiciary is facing to disregard Bill of Rights, Chief Justice said,â€ These conversations, difficult as they are, cannot be avoidedâ€. We must never sacrifice our hard won constitutional civil liberties and freedoms. They came for civil society, them media, then commissions, then Somalis now it is our civil liberties.Â PurportingÂ to invokeÂ Public Order ACT, Cap 56 Laws of Kenya is to say the least laughable .