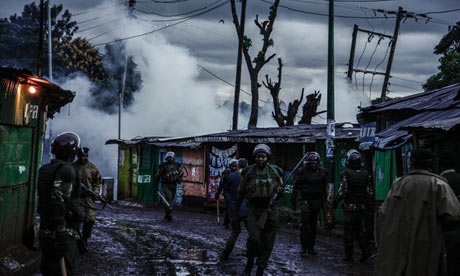 Kenyan police have deployed forces in Nairobi and the lakeside city of Kisumu to contain the continuing threat of violence after two people were killed in riots on Saturday, officials said, but the country remained mostly peaceful after a court upheld Uhuru Kenyatta’s election as president.

Youths in the Kenyan capital’s slums were still trying to protest against the supreme court’s ruling against prime minister Raila Odinga’s challenge to the validity of Kenyatta’s win, Moses Ombati, the deputy police chief for Nairobi, said on Sunday. But he said he hoped the presence of armed police would deter illegal protests like those that erupted on Saturday immediately after the court’s ruling.

“There is tension obviously, but with the deployment of officers we have done we don’t anticipate anything,” Ombati said.

Although losing candidate Odinga accepted the court’s decision, some of his supporters reacted angrily to his defeat, taking to the streets and engaging the police in running battles.

Two people were killed and five seriously injured in riots in Kisumu, Odinga’s home region, said Ole Metito, police chief for Nyanza province. At least seven rioters are now in police custody for their alleged roles in the Kisumu violence, he said.

“There was chaos in places where people were throwing stones. Now we have officers monitoring the general situation,” Metito said.

Kenyatta, who is to be sworn in on 9 April, said late on Saturday that he would be a president for all Kenyans and urged them to move past the election and build a nation “at peace with itself”.

The 4 March election was described by many as the most complicated in Kenya‘s history. It pitted Kenyatta against Odinga, whose disputed loss in the 2007 election triggered postelection violence that killed more than 1,000 people and displaced hundreds of thousands. Kenyatta faces criminal charges at the international criminal court for allegedly encouraging that post-election violence.

He will become the second sitting African president to face charges at the Hague. William Ruto, his running mate, who is set to become Kenya’s deputy president, faces similar charges. Both men deny any wrongdoing.

Unlike after the 2007 election, which degenerated into tribe-on-tribe violence, Kenya has been largely peaceful following these elections.

Odinga claimed the presidential election was tainted by irregularities. His lawyers alleged in court that the electoral commission boosted Kenyatta’s numbers at some polling stations, helping him to avoid a runoff election with Odinga. According to official figures, Kenyatta avoided a runoff by about 8,000 votes out of 12.3m cast.

The supreme court decided that Kenyatta was validly elected and that the election was conducted in compliance with the constitution. The judges are expected to release a detailed judgment in two weeks.

Odinga said he accepted this verdict even though he regretted that some of the evidence produced by his lawyers had been disregarded.

“Casting doubt on the judgment of the court could lead to higher political and economic uncertainty, and make it more difficult for our country to move forward,” he said on Saturday after the verdict.

“We must soldier on in our resolve to reform our politics and institutions. Respect for the supremacy of the constitution in resolving disputes between fellow citizens is the surest foundation of our democratic society.”