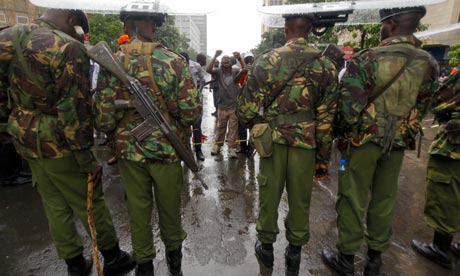 Kenya‘s supreme court has unanimously upheld the declaration of Uhuru Kenyatta as winner of the country’s presidential elections, rejecting claims by opposition candidate Raila Odinga that the electoral process was tainted by rigging. Odinga accepted defeat at a press conference, bringing to a close weeks of uncertainty following the 4 March elections.

“It is our view that this court process is yet another milestone in our long road toward democracy,” said Odinga in his concession speech. “Let us not allow the elections to divide us.”

Chief Justice Willy Mutunga said the election had been “free, fair, transparent and credible”. Odinga, together with a Kenyan civil society group, wanted the election results dismissed because of “massive malpractice”. Odinga alleged that the electoral commission covertly added names to its list of registered voters and stole votes from losing candidates to give them to Kenyatta. A court-ordered partial recount found numerous tallying errors, but the commission’s lawyers said they were mere clerical mistakes.

The lawyer for the electoral commission, Ahmednasir Abdullahi, said Odinga simply did not have enough evidence to prove his claims.

“You can’t invalidate a presidential election, where 12 million people voted, on speculation,” he told the Observer after the ruling.

This year’s election passed peacefully, though it was enforced by a massive police presence throughout the country. Though things may return to normal, the now official election of Kenyatta, indicted by the international criminal court for committing crimes against humanity five years ago, complicates international diplomatic relationships with Kenya. Gladwell Otieno, head of the civil society group that brought the case with Odinga, hoped for reform of the electoral commission despite the ruling in its favour. “What is the use of setting up institutions and equipping them with billions of shillings if they can fail in their job and still get away with it?” she asked reporters.

But the court, established in 2010, is one Kenyan institution that seems to have passed a crucial test. Odinga’s lawyer George Oraro told the Observer, “It is an historical moment for the Kenyan society and we ought to take it as a development in our constitutional process.”