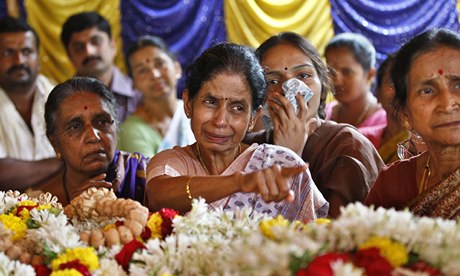 Family members at the funeral of Sudharshan Nagaraj, one of the Westgate victims. Photograph: Aijaz Rahi/AP

Intelligence agents are said to have been in Westgate mall just hours before killings, as criticism over government grows

Kenyan authorities had intelligence pointing to an attack in Nairobi a day before the Westgate mall attack. According to counter-terrorism documents, the government and military were warned that al-Shabaab was planning an attack on the capital where it would storm a building and hold hostages.

There are also reports that Kenyan intelligence agents were at Westgate a few hours before the crowded shopping centre was struck by heavily armed terrorists last Saturday, in a four-day siege that left at least 67 people dead.

“We cannot say that this attack comes as a surprise,” said Farah Maalim, former deputy speaker of the Kenyan National Assembly. “The possibility of something like this happening, and of failures in the Kenyan intelligence community, has worried us for years.” Maalim added: “We have an intelligence service more worried about internal party politics than about threats to national security.”

It was announced yesterday that a sixth Briton has died following the siege. The Foreign Office has said it cannot rule out the possibility of further casualties.

Kenya refuses to comment on reports of warnings prior to the attack, but officials say they are still investigating the relationship between the attackers and al-Shabaab’s local offshoot, al-Hijra. In the past, Kenya’s large Somali-Kenyan population has borne the brunt of suspicion for involvement in terrorism, but sources say that the authorities are now focusing investigations on ethnic Kenyan converts to Islam for suspected links in the Westgate attack. One young convert was arrested and allegedly tortured last week, say human rights groups, for his suspected role in al-Hijra and Westgate. Allegations of human rights abuses and extrajudicial killings by the Kenyan authorities have gone hand in hand with their continuing investigations into al-Shabaab and al-Hijra networks in Kenya.

Terrorist activity in cells in cities such as Nairobi and Mombasa has led to a spate of arrests â€“ including the warrant for the arrest of British woman Samantha Lewthwaite â€“ and what are believed to be assassinations after senior figures such as Aboud Rogo Mohammed, a former leader of al-Hijra, have been killed in unexplained circumstances.

Experts say that, as al-Shabaab has been weakened in Somalia, it has focused more and more on Kenya and its al-Hijra cell. In a report earlier this year, the United Nations group of experts that monitors the activities of al-Shabaab points to the appointment of a new leader for the group in Kenya last year, Sheikh Ahmad Iman Ali, as the impetus for a wave of grenade attacks and improvised explosive device explosions in Kenya, which have killed scores in recent months.

The report also warns that al-Hijra was planning large-scale attacks such as the one on the Westgate mall. “Al-Shabaab no longer recruits young Somali men to carry out dirty work for them,” said Abdiwahab Sheikh Abdisamad, a Somali-Kenyan Horn of Africa specialist at Kenyatta University in Nairobi. “Now they have got members from Uganda, Kenya, Tanzania, even Comoros â€“ these are the ones carrying out attacks.”

The diverse nature of al-Shabaab recruits is backed up by the group’s own online propaganda. One photo, published on a pro-al-Shabaab website this year, shows light-skinned and at least one apparently white recruit in desert military uniform during a parade. The site claims that the images were taken at Barawe, a port in south-eastern Somalia where the Kenyan-born suspected al-Qaida operative Saleh Ali Saleh Nabhan was killed in a US military raid in 2009.

“Al-Shabaab is getting global support. It does not belong to Somalis any more. They have a strong network, and they are going from China to Chile, from Khartoum to Canada,” said Abdisamad. “They want to Islamise the whole world, they have a global agenda and are getting advice and recruits from everywhere.”

Yet despite widespread knowledge of the activities of al-Hijra, little has ostensibly been done to disrupt the group. “There are reasons why you don’t just smash these networks up,” said an international intelligence source. “You have to be very surgical in the way that you take it apart, with targeted prosecutions or assassinations.”

Some have speculated that Kenya lacks any serious intent to disrupt al-Shabaab. “If we wanted to eliminate al-Shabaab in Somalia, we could do it in less than three months. But it seems we decided we didn’t want to eliminate them completely because then we would have no legitimacy for being in Somalia,” said Maalim. “Somalia is a cash cow for all the countries in the region,” Maalim added. “It’s a free-for-all. And in Kenya the terrorist attack seems a source of celebration for some â€“ now we can challenge the international criminal court, we receive equipment and arms from the US and other allies, we can get the aid money flowing.”

Kenya’s counter-terrorism and intelligence strategy will come under increasing scrutiny as details continue to emerge from the rubble of the Westgate shopping centre, where an unknown number of bodies still lie buried after a large part of the structure collapsed. Seventy-one people are still missing, and no bodies have yet been recovered.