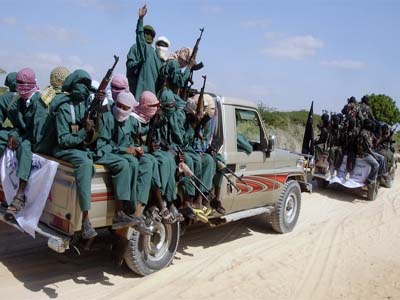 Abdikadir Duecsane a top Al shabaab strategist who also doubled as the militiaâ€™s commander in the southern town of Jilib near Kismayu is dead.

Duecsane was among those killed when a missile launched from sea by Kenya naval ships hit a strategic facility and positions where the militias were holding a strategy session.

Kenya naval warships strategically positioned on the Somali-Kenya waters have shelled strategic locations of the port city and its environs destroying defensive positions held by the militants.

The killing of Abdikadir Duecsane will greatly weaken the Al Shabaab fighters; at the time of missile attack he was in a meeting with top local militia leaders in a meeting that was (most likely) planning a counter attack on KDF.

A credible source from the battle front told this reporter that the militias have registered heavy causalities more than what is reported my the media.

The attacks that commenced last Thursday were purely preemptive on the port city mainly to soften targets before rolling in ground troops.

The precise strikes by the Kenya Navy and the helicopter missile launches have hit several Al Shabaab technicals in the area around Kismayu.

Earlier on Friday there were reports of renewed attacks in Afmadow after KDF got intelligence that the militants were intending to recapture the town. A security experts termed the move by the militia to recapture Afmadow tactical designed only to delay the entry of KDF into Kismayu as they try to buy time hoping for some other circumstances that may boast them.

Ground sources indicate that the Alshabaab militias are now moving deep interior to the agricultural towns of Jamama and Jilib as KDF intensifies attacks on areas close to Kismayu , Aerial and naval bombardment Â already shelled Al Shabaab installations in Harbole and its environs.

The use of missile launching helicopters and the support from Ras-Kambon militias in Harbole is a game changer; the battle is taking a faster pace than earlier anticipated.

The desire of AMISOM was to capture Kismayu before Somaliâ€™s presidential elections scheduled towards end of September.

AMISOM is moving Uganda and Burundi soldiers to the south to join the Kenyan ground forces that are in charge of sector II that includes Kismayu.

The militias who have been driven out of more than fifteen (15) towns to date including the capital Mogadishu have been moving much of their fighting power to the port city creating massive defensive positions in readiness to defend the city that is a main source of revenue.

Reports that fighters are in mass exodus from Kismayu to deep interior villages is a signal that they have been greatly weakened by aerial and naval bombardments so far and the ground troops may find it easy than it was expected.

Ground troops are expected to hit Kismayu streets by end of the week.

On Monday KDF spokesman confirmed that KDF/AMISOM was ready to take over Kismayu, â€œAl-Shabaab are doing everything to slow down our movement but they will not stop it. We know that this is not a walk in the park. We are not at the beach enjoying ourselves.

“We are prepared to have casualties and this is a price that our gallant soldiers are ready to pay,â€ he said, he however did not give any timeline.

The delay for match of ground troops to Kismayu was purely tactical to allow aerial attack to clear threats as AMISOM was moving in Uganda and Burundi troops to join KDF for the ground attack into Kismayu.