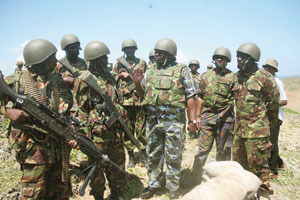 Kismayo Airport in Jubbaland will remain closed until elections in Somalia’s most stable state are concluded in August 24, authorities have said.

On Monday, a plane reportedly carrying a delegation suspected to be a combination of federal government officials and ENDF was blocked from landing at the airport by KDF soldiers.

Sources claim that the latest move is a strategy by Kenya to protect the reign of Sheikh Ahmed Madobe, who is facing stiff opposition in Thursday’s polls as regional president.

A staff member at Kismayo airport, who gave his name as Ismail, said the plane took off from Gode in southeastern Ethiopia and eventually landed in the Somali town of Baidoa. It was not certain if the plane was civilian or military.

“It wanted to land at Kismayo airport but was denied clearance because it did not send information in advance,” Ismail said

Also, the sea port of Kismayo and roads leading to the state will remain closed as Sheikh Madobe plans a major onslaught against his rivals in Jubbaland.

Kismayo hosts AMISOM from Sector 2 (Kenya) and Sector 6 (Burundian, Kenyan, Ethiopian). The team managed to flush Al-Shabaab out of the Kismayo town in 2012.

commander of Sector 6 who is Ethiopian proposed two days ago deployment of units of ENDF at Kismayo airport but Kenyan commanders asked him to bring a written request and eventually denied him.

Sheikh Madobe is one of Kenya’s closest allies in the fight against Al-Shabaab militants. He helped KDF through his Ras Kamboni Brigade to conquer Kismayo, a city that had been under Al-Shabaab for years.