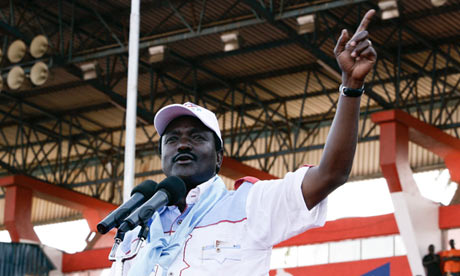 Former Vice President Kalonzo Musyoka is fast rising in opposition politics with new vigour at tackling the lethargy in the Jubilee government to respond to the myriad challenges facing the country.

Mr Musyoka is being keenly watched by both Jubilee and the ODM wing of the CORD coalition where succession politics is a never ending conversation since the loss in the last general election.

Initially seen as political weakling and pro-government politician, Kalonzo has shocked many political observers with his new hard hitting criticism of the Jubilee government.

Kalonzo also outwitted skeptics who thought it was just a matter of time before he bolts out of the CORD coalition and rejoins the Jubilee government for whatever role; a task which now seem to have been left to Amani leaders Musalia and Eugene.

A Kalonzo skeptic Â who attended the home-coming ceremony of Suna East MP Junnet Mohammed claimed how the Wiper leader harshly took on the Jubilee as well as set the tone for 2017 CORD politics, which, to him, only means the Vice President is in the opposition for the long haul.

Yet Kalonzo has all the reasons to be seen to tackle Jubilee ruthlessly. With Odinga’s 2017 bid in doubt and the possibility of inheriting the Luo, Luhya, Kamba and coastal spoils, as well as a countrywide support by a coalition with political tentacles in each region of the country, Kalonzo stands atop potential 2017 aspirants.

Unlike 2013, the CORD coalition will get to 2017 without the baggage of incumbency. By then, going with the what the Jubilee has achieved since assuming power, the digital dream will already have past as another analogue nightmare. 2017 is Kalonzo’s best bet and CORD’s safest harvesting year (that’s if IEBC, NSIS, CID, OP does not equal TNA again).

From 2007 onwards, Kalonzo has virtually served the needs of all the top leading politicians in the country. He spent months securing freedom for Uhuru and Ruto until the blessings in prayer rallies exorcised him to the fringes of political power. He almost became irrelevant.

Fortunately, Odinga by then was a senior political bachelor and the two men just ‘gayishly’ married to form CORD, sending shock waves across the political landscape. Save for the things that happened on March 4, the two almost won the elections. In their stable is over 5 million votes!

With the two by elections of Kibwezi, Matungulu and now Bungoma, Kalonzo has shown that he is indeed equal to the tasking role as an opposition leader. In Kibwezi, Kalonzo showed rare flexibility, supporting Tip leader Kalembe Ndile whom he was then known to have a frosty relationship with though Ndile would later lose the by election to Dr Musimba.

On Kalonzo’s side is the grandmaster of political deal-making, the renegade Johnstone Muthama who first made the unity between Musyoka and Odinga feasible at a time when pundits thought Musyoka would never cross over to deputise Odinga in CORD.

It remains to be seen whether the son of Tseikuru can turn the political goodwill into massive vote hunt to dislodge Jubilee come 2017, which begs the question; is CORD ready for President Kalonzo Musyoka?