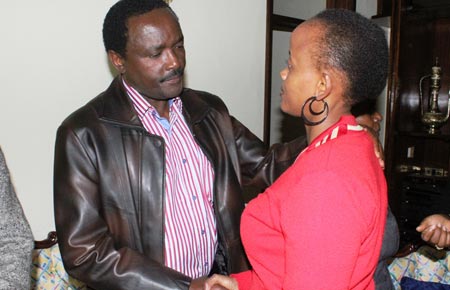 Here below is the statement by Wiper Democratic Party leader, vice president Kalonzo Musyoka in relation to Kethi Kilonzo’s disqualification to vie for the Makueni Senate race slated for July 22 by the IEBC Tribunal.

As we have stated before, democracy in Kenya continues to be on trial. This was evident during the petition that challenged the flawed presidential results of the March 4th 2013 general election, which due to obvious reasons, the Supreme Court of Kenya upheld, much to the dissatisfaction of the millions of Kenyan population. The same monster has come to haunt us again.

Yesterday’s ruling by the Disputes Resolution Panel of the IEBC which revoked the valid nomination of Ms. Kethi Diana Kilonzo and technically knocking her out of the Makueni Senatorial by-election was just the tip of the iceberg. A technicality was being sought by the Jubilee Coalition to bar a very strong candidate from the race because they obviously feared her strong candidacy on Wiper Democratic Movement, which is a CORD affiliate.

This is a major political war against CORD, disguised as a legal battle in an obvious attempt to impose a leader on the good people of Makueni. It is clear that Jubilee vehemently tried all means possible to lure Ms. Kethi to run for the seat that was held by her late father Sen. Mutula Kilonzo on any of its affiliate parties, an attempt that didn’t bear fruits, hence their resolve to frustrate her candidacy. Should she have overtures accepted one Agnes Ndetei, Jubilee’s messenger, would she be going through this torture?

What is clear is that Kethi is a people’s choice and everything must be done to ensure a fair chance for the people of the greater Makueni County to choose for the sake of democracy. The independence of the Independent Electoral and Boundaries Commission is questionable by all ways. The audit processes of the body continue to reveal anomalies which raise serious questions on the credibility of the IEBC processes, operations, systems and the outcome. Of concern is the manner in which TNA, a major player in the Jubilee Coalition raised the issue of Kethi’s voter registration status without the knowledge of the electoral body, begging the question of who is the custodian of the IEBC’s vote register.

This clearly shows that TNA is IEBC and IEBC is TNA. TNA must have tampered with the voter register, hence deleting Kethi’s name. CORD demands that Justice be done to the people of Makueni. No leader should be imposed on them. The people of Makueni need transparency and Democracy. Thank you. God Bless Kenya.