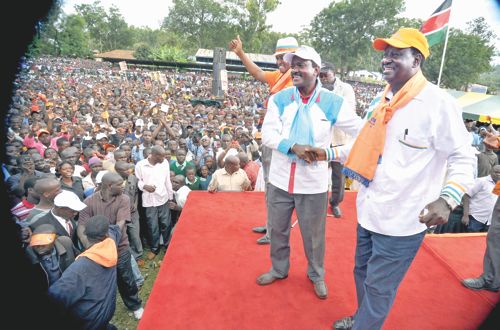 The Coalition for Reforms and Democracy will hold its second governors and senators meeting in the lakeside city of Kisumu, Â CORD co-principal Kalonzo Musyoka has revealed.

Speaking yesterday during the burial of his grandmother Â Nduki Kiteme, 117, at Mususya Village, Kyuso district in Kitui County, Kalonzo revealed the January 18 meeting will offer the CORD leadership an opportunity to urge its senators and governors to lead in the implementation of devolution so that Kenyans can start celebrating the devolved system.

Kisumu County, alongside Mombasa and Nairobi are all controlled by CORD leaders. Other significant counties that CORD won during the last elections includes Machakos, Kisii, Turkana, Nyamira, Homa Bay, Migori among others.

“Cord will strive to show the country the right political direction as it sets eyes on the top seat come 2017,” he Musyoka.Â He was optimistic about the future of the coalition, repeating his earlier claims that the Jubilee Alliance currently ruling robbed the opposition of victory. Kalonzo also took a new swipe at the Jubilee, accusing the government of making life very difficult for majority of the people.

“In Kisumu we will be categorical in telling Cord’s governors and senators to keep Jubilee in check and protect the ideals and principles of devolution’,” he said.

Choosing Kisumu for the all-powerful political meeting is symbolic of CORD’s agenda to maintain a close eye on the counties managed by the coalition. Kisumu also serves as the birthplace of Kenya’s plural politics – being the city of the doyen of opposition politics Jaramogi Oginga Odinga.