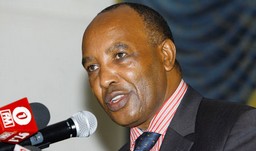 OFFICE of the President staff at Harambee House are reportedly ignoring instructions from State House and are now being accused of trying to sabotage the presidency.

Some officials working with Secretary to the Cabinet, Francis Kimemia, have allegedly been not been following orders issued by President Uhuru Kenyatta’s chief of staff Joseph Kinyua.

“Kimemia has been one of the most powerful individuals in government even before Jubilee took over power. It is therefore expected that he has a lot of loyalists. Remember even Kinyua was working under Kimemia before,” a source within the presidency said.

Kinyua, a highly respected technocrat, was appointed as Chief of Staff and Head of Public Service in September, an appointment interpreted as clipping Kimemia’s power. Kinyua was previously Treasury Permanent Secretary.

Kimemia acted as Head of Public Service after Francis Muthaura resigned in January 2012 after he being indicted for crimes against humanity charges at the ICC. (The charges were subsequently dismissed.)

Many of those close to Uhuru and Ruto have been pressing for Kimemia to be removed.

But the President appears to be reluctant to purge the civil service of remnants of the previous regime.

Ruto supporters believe that he helped to fix Ruto over his charges at the ICC. Recently Ruto’s legal defence team complained that Kimemia had denied them access to documents at Harambee House.

Yesterday, President Uhuru Kenyatta’s speech writer Eric Ng’eno wrote a hard hitting opinion piece published in the Standard and Nation where he described the civil service as a “parallel state”.

“Anyone having intimate contact with the Kenyan civil service will experience the dark menacing suggestion of a â€˜parallel stateâ€™. It is as real, yet as illegitimate as the black economy and reposes in the machinations of several well-placed potentates of the civil service who channel Executive power to secure objectives distinct from those pursued by the constitutional Executive,” Ng’eno wrote.

His sentiments are shared by a large number of State House operatives that the Star has spoken to.

Another source said that some individuals are still exercising their authority as they did under the Kibaki regime.

“These individuals dictated what decisions were implemented and which were not. It is a powerful clique that has been seeking to continue using its networks to run the government away from State House,” the source said.

One government official said there are “two governments where one is run by civil servants and the other is run by the President and his deputy.”

“Kinyua now appears to just be another colourful addition to State House with no powers. Most of the civil servants have their loyalty on Kimemia with whom they have worked with for long,” said the official.

“Public sector thieves are not even looking behind their shoulder before dipping their hands into the till. The civil service is as inert, complicit, anachronistic and comfortable as ever. Every straightforward initiative is steeped in endless controversy,” Ng’eno said.

Several foreign investors have reportedly written to the Office of the President complaining that they were being harassed by extortionate bureaucrats, including at Harambee House.

One senior official at Harambee House allegedly told some investors that they would first have to put up a school in his village before they could be allowed to build elsewhere.

Ng’eno appeared to be echoing demands by Jubilee supporters for Uhuru and Deputy President William Ruto to reform the civil service.

“No major changes have been made in the civil service. Therefore, the parallel state remains intact and active, at the heart of the Jubilee administration. Their operational space, tacitly conceded in the last Presidency, is untouched. According to its thinking, the civil service is in a power-sharing arrangement with Jubilee,” Ng’eno wrote.