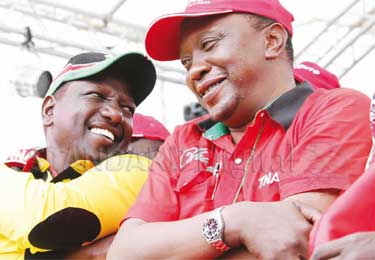 It is a sunny Wednesday morning. I write this letter from a small village in Kenya called Baricho. I woke up early today because I have to take care of the ‘Kamongo’ tomatoes in a quarter acre of land. They need some top dressing and I have to finish before midday as predictably, the rains may set in, in the afternoon.

As I apply the Calcium Ammonia Nitrate (CAN) fertilizer to each plant, my mental sheets cannot helpÂ but recall the sentiments that were laid bare at a political gathering in the Rift Valley. Do not get me wrong gentlemen.

I liked all the talk because in the first hand, it reminded me that the greatness of our country is the freedom of expression. On the other hand, I was reminded that one of my favorite books in the Bible is the Gospel according to St. Luke!

In the gospel according to St. Luke, we read a dramatic little story of a man who by all standards of measurement would be considered a highly successful man. The irony is that Jesus called this man a fool. If you read that parable, you discover that the central character in the drama is a certain rich man.

This man was so rich that his farm yielded tremendous crops. In fact, the crops were so great that he did not know what to do. It occurred to him that he had only one alternative and that was to build some new and bigger barns so he could store all of his crops.

And then as he thought about this, he said, “I am going to do something after I build my new and bigger barns. I am going to store my goods and my fruit there, and then I am going to say to my soul ‘Soul, thou hast much goods, laid up for many years. Take thine ease, eat, drink, and be merry.â€™”

Of course the parable does not end with that man making this statement. It ends by saying that God said to him, “Thou fool. Not next year, not next week, not tomorrow, but this night, thy soul is required of thee.” And so it was at the height of his prosperity he died.

I am also inclined to think that Jesus called this man a fool because he failed to recognize his dependence on God. This man talked like he regulated the seasons.

This man talked like he gave the rain to grapple with the fertility of the soil.

This man was a fool because he failed to realize that he could not do anything by himself.

This man was a fool because he failed to realize that wealth is always a result of the commonwealth.

He was a fool because he ended up acting like he was the Creator instead of a creature.