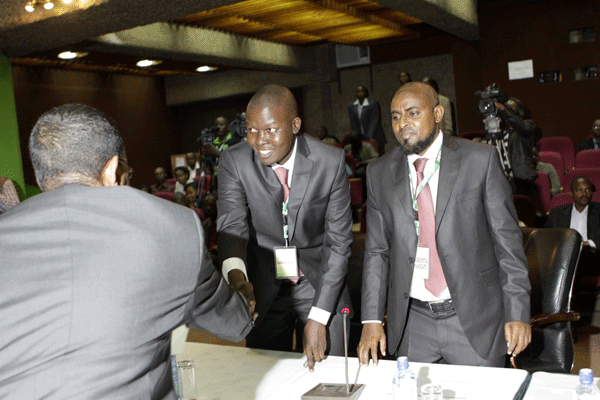 The day soldiers stop bringing you their problems is the day you have stopped leading them. They have either lost confidence that you can help or concluded you do not care. Either case is a failure of leadership,â€ Colin Powell.

The executive has had its equal share of the lost public confidence and this is evidenced during the cabinet secretaries nominations prior to parliamentary approval.

It was clear that the president and his deputy weren’t ready with the list of cabinet secretaries as it took longer to finally name the complete list and it is rumoured that two to four cabinet slots are yet to be filled.

The president broke his promise when he promised Kenyans that he will include all his competitors in his government as a way of healing and moving this country forward and instead he turned into a tribal president and much of the appointments benefited two communities if not one.

The presidents level of weakness came to light with Mps threatening to slash off budgetary allocation to various sectors of the economy and the president was seen pleading with theÂ MPs to work first before they could be given any increment and this special treatment was contrary to the treatment that was given to the striking teachers who were threatened with sacks if they didn’t report to work by the Cabinet secretary in charge of Education which made most Kenyans lose confidence in the affairs of the government in tackling both instances.

The idea of appointing someone with no security background to head the interior ministry was clearly confirmed during the Westgate mall incident when General Karangi was seen in camera loudly whispered instructions to the interior cabinet secretary, the cabinet secretary went on to give several contradicting statements on statistics that left the public confused.

Public confidence was further lost when there were allegations of of security personnel looting at the expense of protecting the premise.

The cabinet secretary together with our security organs failed in coordinating and harmonizing activities during the westgate Mall incident. This was clear when there was a standoff or rather stalemate between the Kenya Defence forces and the police that led to prolonged rescue mission and the death of a police officer in friendly fire.

Several instances of grenade attacks at Gikomba market and along Thika road in Nairobi has added oil to the already burning fire of lost public confidence.

The alledged Sacking of Mr Rugut through Sms by the Cabinet secretary of Devolution Ann Waiguru sparked a hot debate amongst the ruling coalition,the opposition and Kenyans at large that led to an inconsistent motion in parliament that was geared towards an impeachment proposal.

The concluded Government-Safaricom security deal that involves installation of CCTV cameras in all major cities in Kenya created more confusion as Kenyans questioned the legality of the deal that the president and his Cabinet secretary for IT Matiangi defended so passionately hence public confidence lost.

The recent demolition of houses in South B that led to serious exchange of words between the Senator of Nairobi Sonko,the Cabinet secretary for Agriculture with subsequent call made to the president who was not aware of the ongoing demolition clearly exposed the confusion and lack of coordination within the executive leading to lost public confidence.

The recent Standard gauge railway has been a dark cloud hanging on the heads of Kenyans demanding answers on how the Government to government single source tendering was realized and who were involved.This was followed by the controversial payment of the Anglo-leasing beneficiaries that led to more frustrations amongst Kenyans.

The executive has been seen in the eyes of the public as a machinery that either delays or frustrates the full implementation of the constitution, fuels ethnic imbalances on appointments, talks too much and does very little.

The institution has lost public confidence and all this begun after the courts threw away the petition tabled by the Cord coalition on the presidential results. To rub more salt on the wound everything seems to be falling apart when top officials in the judiciary undermined one another in a power struggle as evidenced in events that led to Sholleis case.

The judiciary has seen been involved in a series of â€œcat and mouseâ€ games on matters touching on corruption ,mismanagement of public funds and washing their dirty linens in public.

On several rulings after the Presidential petition, the judiciary has given very contradicting judgements, some which has even contradicted what by law is the Superior opinion in the judgement of Raila Odinga Vs IEBC. In law, the Supreme Court’s decisions are binding to the lower courts. However, the rulings of Peter Munya, Mary Wambui Â has led to Kenyans, including lawyers of high standing, questioning the impartiality of the country’s top judicial organ.

The dictum ‘why hire lawyers when you can buy the judge’ has returned with vengeance. Justice after the 2010 constitution is costlier than it was before, making many people conclude that the more things change, the more stuff remain the same.

The institution has so far lost more public trust and confidence as evidenced by constant political divisions that are postponed tentatively as they come together when they have one thing in common,to increase their salaries and allowances. Parliament has been used as a tool for exercising the â€œTyranny of numbersâ€ when it comes to passing of crucial bills. The senate and parliament have been involved in serious battles over power,supremacy and authority and this has been fuelled by the â€œTyranny of numbersâ€ vice that has crippled and delayed legislation in both houses.

There has been constant supremacy was between the Mps and senators,the governors,senators and ward representatives at the expense of service delivery and this has left so many wounds in the hearts of Kenyans as they watch helplessly contrary to the promise of a new constitution that was to bring governance and services closer to Kenyans.

The inability of coping with multiple systems enshrined in the new constitution far from our monolithic system that Kenyans have known for the last fifty years clear gives us a glimpse of a looming constitution crisis.

The inclusion of the County commissioners that are expected to chair security meetings at county level,read the presidents speeches at public rallies clearly shows how the Executive have fought tooth and neck in ensuring that Devolution fails as duplication of roles are imminent in this new set-up which reminds us of the Moi era where the provincial administration was a system that was used in effecting the former president’s â€œpatron clientalismâ€ system. Devolution to date is still a dream to Kenyans.

From the JKIA fire to the west mall incidence clearly shows how incompetent our systems are in relation to responding to emergencies,I was deeply embarrassed when a friend of mine from Tanzania called me and mocked me about kenya bragging about having a strong economic base in East Africa and all they could afford was to put off fire using buckets.

The war between the Inspector General Kimaiyo and the national police service commission chairman Johnstone kavuludi clearly shows the battle for supremacy that has so far led to lost public confidence in an institution Kenyans at least thought was on the path of reforms. The recent ban on â€œTinted windowsâ€ clearly shows lack of information on the side of the police boss who with his experience as a police officer for so many years never bothered to read the police Act hence throwing the ball in the coat of the panel team that vetted him and concluded that he was the best and highly qualified to take the job and such moves left the public perplexed.

This is one of the most difficult situations in the history of our country.I remember during the chants “lets not be vague,let us go to The Hague” slowly faded away when the the then prosecutor exposed the Ocampo six.

The events that followed confused Kenyans and public confidence was lost when the blame game begun on who was responsible. The presidential debate came with promises of full cooperation with the ICC and as I was sitting on the hot seat between the deputy presidential candidate Dr Shem Ochuodho and Ronnie Osumba I clearly remember the words of our deputy president clearly explaining to us how they will fully implement the constitution,run the government through Skype when at The Hague and his sentiments were seconded by our president at the presidential debate.

Several weeks later what unfolded clearly shows how public confidence was lost on the ICC issue when our legislative arm introduced a bill in both houses to withdraw from the Rome statutes.This is the dilemma Kenyans have when comparing personalities before and after elections. I believe that the content of the Waki report should be made public so that we know the other suspects.

I am in the opinion that all Kenyans either directly or indirectly took part in the post election violence.The president and his deputy should not carry this issue as if it’s a burden to Kenya and the whole of Africa and we have a strong opinion that they should sort this as personal issues so that it’s clear that it’s not Kenya or Africa on trial.

What is terrorism? we have no capacity to fight terrorism since we are engaging in matters in oblivion.I believe that fighting corruption and improving the living standards of Kenyans will improve the situation. “Change ni Mimi na wewe” I agree with this concept and if Kenyans learn to know their neighbours better have regular estate meetings as opposed to the â€God for us all and every man for himselfâ€ attitude then security will be improved drastically.

Our foreign policy has always been structured on the foundation of â€œNon-alignmentâ€.The calls by the president to turn East as opposed to the west is an â€œEconomic time bombâ€ as this will adversely affect our economy directly or indirectly.

When I perused through the details of the Budget,I was flabbergasted when I realized that a deficit of 300 billion was to be internally funded and such move will surely cripple the hopes of Kenyans as they will be taxed more to recoup much of the deficit.

The trip to Brazil by Harambee stars is ill conceived. I disagree with this idea of the president sending stars to Brazil when our very own under 17 football team was withdrawn from a CAF competition due to finances.The same senior players who played in Comoros haven’t been paid their allowances. This, I’m afraid, is not how to improve soccer in this country.

We must invest in a youth system. Otherwise this knee jerk reactions are mere publicity stunts. Whoever is the advisor should do a better job.

The call on National Dialogue is a path the government should embrace with both hands.It will be an opportunity for self-evaluation.A well-coordinated process involving all stake holders namely: The Government,opposition,all the other presidential candidates,religious leaders,Business community and other interested parties will surely give a clear road map of moving this country forward.

Conclusion: We have a dilemma in Kenya’s leadership,we need to practise sincerity in all our activities.The president should stand up,be more brave,take charge of this country by putting his house in order because I believe that he has the power,potential,wisdom and capability on the same.