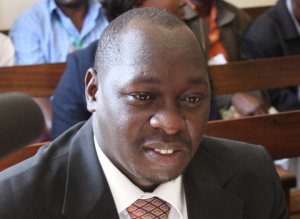 If there is a politician who has undergone complete and extreme political makeover, that man is the former Chereng’any legislator. It seems Kuttuny’s new creed is: “I am Joshua Kipserem arap Kuttuny and I’m no longer rude, don’t count me out just yet”.

Amid all the hullabaloo surrounding the jubilee government, its performance close to a year down the lane and the controversial presidential appointment, one notable void stands unfilled: the void in the midst of noisy Kenyan politics, a void in the place of crowd electrifiers and potential stand-up comedians who lost elective careers in the March 4 elections. . .the place of JOSHUA KIPSEREM arap KUTTUNY.

Kuttuny jumped into the thriller that is kenyan politics fresh from Moi University where he had taken part in some corridor shouting and the habitual strategic critiquing fuelled by spirit of students’ comradeship. It is with this vigour and burning spirit that he easily won the hearts of the cherang’any constituents, then a whole lot of confused multi-ethnic population still nursing the purportedly lopsided rule of the outgoing legislator, Kipruto arap Kirwa.

To the Nandis, he became a son with a sure pledge to deliver a promising future, to the Marakwets, he looked and sounded a charming son in-law (Mrs Kuttuny is a Marakwet), among the Gusii community and kikuyu community, he won less hearts but the usually divided Majority Luhya votes gave him sailed him through.

With Kuttuny as the new legislator, an entertaining darling of both national and rural politics, cherang’any plunged into the limelight for having one of the most defensive and ‘offensive’ leaders of this generation for an MP.

Like a woman, Kuttuny mastered the art of skilfully multitasking; juggling between shouting loyalty to his political Godfathers and making sure that he maintained the same locally. He succeeded in both. Any living soul in Cherang’any will undoubtedly confess to you that no large numbers of bridges have ever been fixed since, as it was done during Kuttuny era, no many kilometers of roads have ever been opened up and repaired as kuttuny got it done. He set up and renovated dispensaries through out the constituency like his life depended on it.

And while all these were taking place, the shouting and mass processing of sound-bites for the local media was under-way both on local and national fora.

It is the same spirit and confidence of crowning Kenya’s media screens during the common political satires the likes of ‘Bulls eye’ and ‘truth meter’ that would later shadow what he had done back at home and bring him down rolling in the elective politics.

Kuttuny took the physical strength and un-opposable voice of a university graduate to national politics but he forgot one thing back at the NCT’s SR’s and LH’s that are Moi university’s school of Arts and social science lecture venues: the attentive and observant nature of a success bound student. He failed flat in learning and observing from his political guardians, the likes of William Ruto, that, body language and choice of words is a life and death issue in seeking any elective posts.

What he used to do with the likes ‘Sonko’ on national function was directly symmetrical to what he applied to his campaigns in a region where ethical and good cultural dynamics are still adhered to; had he been a Language student, probably ‘discourse analysis’ would have helped him know what change in context can do to a written or spoken text.

Kuttuny, with the way he used to tear Raila apart amid cheers in other functions tried it on his otherwise not tight competitor, Wisely Kipchumba Korir.

The ‘unpleasant’ phrases he used, the flashing of middle fingers in abuse of Korir in few rallies and the ‘sheng’ approach didn’t go down well with a huge chunk of the Chereng’any electorate.

Korir used this to narrow down the otherwise yawning gap two a close to lead by 3000 votes. This happened albeit Kuttuny making several assurance that the coming Kenyan president will be moulded from his own bare hands (which probably came to pass) and that he will be in the Kitchen passing over excess food to the people of Cherang’any ( which is probably happening).

With such a close win, Cherang’any to this date remains a highly politically divided constituency with two strong opposing factions.

Right from social media wars on a platform titled CHERANG’ANY POLITICS to verbal exchanges in political meetings. Kuttuny, probably as he promised, has vowed to live upto his promise of passing over the excesses to Cherang’any. If anything, he still made it to the proverbial Kitchen.

This, to those loyal to the current MP is a sabotage to the current leadership. For kuttuny, change is all he has embraced, his appearance in every burial, every wedding and every fund raiser in Cherang’any today, with a paradigm shift in his utterances is perhaps the tell tale of a guilty student, a student given a chance to re-check their past and improve so as to pamper their future.