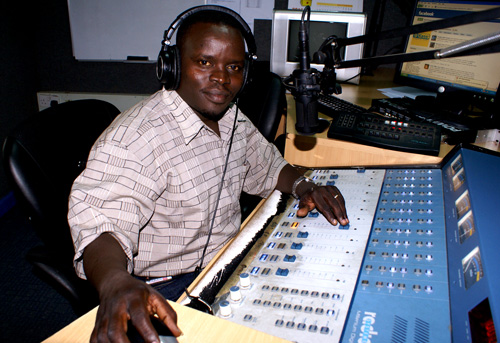 Former radio presenter Joshua arap Sang has broken ranks with two suspects with whom he faces criminal charges at the International Criminal Court and endorsed CORD’s presidential candidate Raila Odinga ahead of elections next Monday.

Sang has dismissed the coalition between William Ruto and Uhuru Kenyatta as incapable of bringing peace between two dominant communities in the Rift Valley who have fought during elections since 1992.

In a recorded message to air on radio, Sang says only a president who is not from the two tribes will be able to bring peace between the two communities, concluding that he believes that President should be Raila.

He has also dismissed as lies, the perception created that Raila could have sent him to The Hague, saying senior government officials who were in office before the coalition, not Raila, coached witnesses to testify against him and Ruto in the case at the ICC.

We are away in a foreign land with my brother because of allegations made against us. The truth must be told. In my opinion, the people who masterminded and planned to have me and my brother taken to The Hague did not include Raila Odinga,Ã¢Â€Â Sang says.

In the statement which Sang says he recorded because of Ã¢Â€Âœheavy feelings in my heart,Ã¢Â€Â the journalist traces what he terms Ã¢Â€Âœbroken MOUÃ¢Â€Â™s of the last two elections in Kenya, including the 2008 power sharing deal.

Mr Sang, who faces charges at the ICC alongside Uhuru who is Jubilee Presidential candidate and his deputy Ruto, appeals to the Kalenjin community not to trust the power sharing deal in the coalition, saying such agreements have twice been disowned after elections.

He cites the MOU signed between Raila and Kibaki in 2002 and the 2007 power sharing deal that brought the Grand Coalition Government into force as instances of broken promises that should make residents of the Rift Valley wary of the deal between Ruto and Uhuru.

Ã¢Â€ÂœToday, some of our people want us to enter into an MOU again through Jubilee. They never respected the MOU signed in 2002 and the power sharing deal agreed on in 2007.Ã‚Â  Why should we expect that the one our community has signed in Jubilee will be respected,Ã¢Â€Â Sang says in a recorded message set to air on radio.

According to Sang, the agreements have not been honoured and he doubts the one between Ruto and Uhuru will fare any better.

Sang says that although President Kibaki and Raila were supposed to share power on a 50-50 basis, it never really happened and only one side of the coalition ran the country.