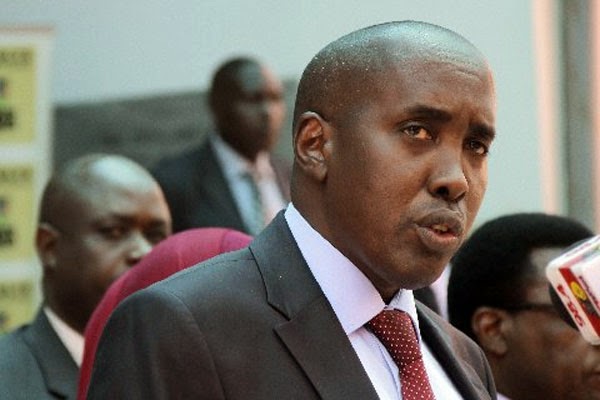 The application was made under the company name, Sleek Automobiles, and was declined by the Immigration Department on June 25, 2014.

The department was acting on information from the National Intelligence Service (NIS) which, in a letter dated May 19, 2014, warned against a renewal.

â€œIt is clear that the applicant is a risk to the country and this application may need to be declined,â€ said the letter addressed to then Director of Immigration Services, Ms Jane Waikenda, who on Thursday was named deputy ambassador to South Africa.

Mr Wassim has been placed on Kenyaâ€™s screening list by the Terrorism Centre, a government agency.

His brother Nadeem Iqbal Mohammed was deported in November last year and subsequently put on a watch list as a prohibited immigrant for suspected involvement in organised crime, money laundering and financing Al-Shabaab.

According to the intelligence agency correspondence seen by Saturday Nation, the Wasim family owns several companies allegedly used for money laundering and other crimes.

The companies include Africpak Motors and Sleek Automobiles, both based in Mombasa, and Nadeem Impex of Nakuru.

â€œThe family jointly runs several companies that are actively engaged in crime and are using corrupt means to extend their stay in the country,â€ wrote then NIS director General Michael Gichangi in a letter signed on his behalf by C.K. Mburu.

Despite this damning record, investigations by Saturday Nation reveal how top government officials, including Interior Cabinet Secretary Joseph ole Lenku and a senior Jubilee member of Parliament, intervened for Mr Wasim to get the work permit.

According to letters, Mr Lenku unilaterally and unprocedurally extended Mr Wasimâ€™s work permit on July 4 following an appeal by the applicant in which he claims to be â€œan exceptionally good and law-abiding investor paying millions in taxes and employing hundreds of Kenyan citizens.â€

â€œThe senior MP approached Mr Lenku who told him to ask Wasim to appeal and he would take care of it,â€ a source in the ministry revealed.

Mr Wasimâ€™s permit was subsequently issued on July 9, 2014 in spite of recommendations from the NIS and immigration officer dealing with the case.

In the note signed by Mr Lenku, the minister says he renewed Mr Wasimâ€™s work permit for one year â€œto allow for further investigations.â€
Mr Lenku yesterday denied any wrongdoing, saying even though he extended Mr Wasimâ€™s permit for a year, he asked NIS to give him a full report on the foreignerâ€™s alleged involvement with terrorism and other crimes.

â€œWe canâ€™t deport someone on the basis of his brotherâ€™s conduct. If NIS provides me with evidence that he is a terrorist, I will terminate his permit immediately,â€ Mr Lenku said.

He added that Muslim leaders went to his office complaining that deporting Mr Wasim because of his brotherâ€™s record would amount to victimisation.

Our months-long investigation also reveals how foreigners are easily smuggled in and out of the country as Immigration officials at the airport look the other way.

They are thought to facilitate their clients to pass through Immigration without checks.

The expose comes 11 months after the Westgate mall siege â€” the worst terrorist attacks in 15 years â€” and the recent killings in Lamu, both of which exposed massive security lapses.

Nearly a year later, questions are still being raised as to how up to 15 foreigners could enter the country undetected, kill with abandon in an upmarket location in the heart of the capital and disappear without trace.

This helped fuel a theory that most of the attackers had Kenyan IDs and passports and could have simply disappeared into the crowds as the rescue got underway.

After the Westgate attack last September in which 67 people were killed, President Uhuru Kenyatta vowed to re-evaluate the countryâ€™s security apparatus and step up counter-terrorism measures to prevent similar attacks. In spite of this, frequent terrorist attacks in churches, buses and public areas have continued.

Kenya is now in the spotlight as a hotspot for human smuggling and illegal migration in Africa because of the easy access to fake identity cards and passports.

Even after the country was placed on the list of 10 most watched countries for terrorist attacks, little effort has been made towards closing loopholes in the issuing of the documents.

Instead, corruption is rife in the Immigration Department, with accusations that Kenyan passports are being sold to illegal immigrants â€” with prices thought to range from between Sh2,000 and Sh10,000.

In the past, some illegal immigrants have been caught using passports that were reported missing from the Immigration Department.

And last month, a broker was caught with 20 original receipts for passports that were being processed. He is alleged to have received the receipts from an immigration officer, our investigations reveal.

The issuing of work permits by the Immigration Department has also been under scrutiny, with Ms Waikenda being put on the spot over how 300 of these documents were reportedly handed out illegally.

According to our sources, one of the easiest ways for criminals, drug dealers and terrorists to live in Kenya is to buy their way by acquiring permanent residence status.

Officials who spoke to us, but who we cannot name without jeopardising their jobs, confided that while legally permanent residency is granted at a fee of Sh500,000 and after due diligence to ascertain the applicantâ€™s suitability, the countryâ€™s soul is being sold for as low as another Sh500,000 to avoid scrutiny.

The government has this year issued 32 permanent residency status while another 60 are pending.

Thursdayâ€™s shake-up is seen as one of President Kenyattaâ€™s most decisive moves so far in tackling insecurity, and attention now shifts on how high up and wide the clean-up will go. The government has also announced plans for digital registration of persons.