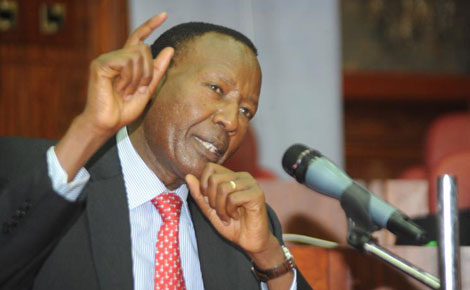 The lifting of the curfew is in line with CORD leader Raila Odinga’s order to president Uhuru and the then CS Joseph ole Lenku. A source at Statehouse confirmed that Statehouse operatives were not comfortable with order that comes 24 hours onto his appointment.

In a statement, Mr Nkaissery said the curfew has been lifted in Lamu Island but remains in force in the countyâ€™s mainland.

He extended the curfew to January 25 â€œfurther to the curfew orders which was issued on November 21 by the Inspector General of National Police Serviceâ€.

â€œEvery person residing within Lamu County mainland is directed to remain indoors during the period the curfew orders is in force,â€ he said.

Statehouse operatives wanted that Nkassery issue a statement that government will review the curfew orders and then lift it after Knessery tours the area. Gen Nkessery is said to have said that he was in charge and that Uhuru had given him powers to only consult the security council and not any other, saying there was only one centre of power- the official centre.

Nkessery was however prevailed upon to issue a partial order that will see the curfew extended in risky areas of the mainland for the next 30 days.

The move to lift the curfew on Lamu Island is a relief to the business community who were most affected by the night movement restriction.

Lamu Governor Issa Timamy had in November urged residents to ignore the curfew as it had gravely affected tourism, fishing and trade, which are the backbone of the countyâ€™s economy.