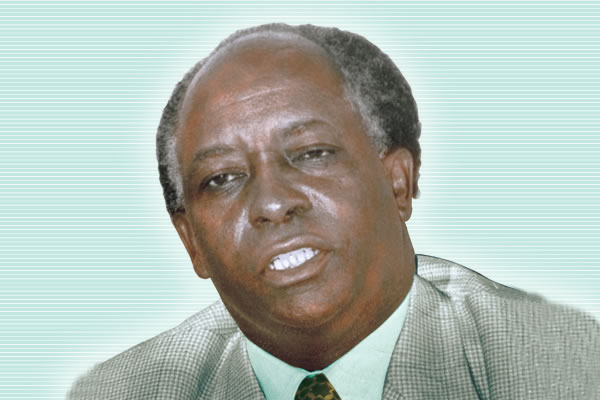 Kamotho died in a South African hospital. The former powerful Cabinet Minister has been battling with Diabetes and also kidney problem for sometime, at the time of his death, his son and daughter were beside him.

Kamotho was born in 1942 in Muranga county.

He helped make and unmake many a politician, and he survived many of Moiâ€™s court intrigues almost to the very end. He would nevertheless ditch KANU and join anti-KANU opposition ranks in 2002 towards the end of Moiâ€™s term in office.

He contested the Murangâ€™a senatorial seat on TNA nomination ticket against Kembi Gitura but after claims of fraud/rigging, he defected to the Mwangi Kiunjuriâ€™s GNU and was again defeated by Gitura. Gitura is now deputy speaker of Senate. Gitura garnered 346,988 votes to beat Kamotho who got 24,095 votes.

After defecting to GNU, Kamotho said the TNA nominations were not â€œfree and fairâ€ as they were marred by irregularities designed to give certain individuals the party tickets. â€œThe nominations were fraudulent and full of irregularities. The party conducted a flawed nomination and we do not accept the results at all,â€ Kamotho said. He said they had been told that the various seats contested were for sale. â€œSome people could have paid for them because those who were elected were unpopular unlike us,â€ the one-time Kanu demagogue said.

He said the partyâ€™s leadership had preferred candidates who sailed through the nominations owing to â€œwell organised plansâ€ to rig the elections. â€œWe are convinced that the TNA party leadership, its officials and agents in Murangâ€™a deliberately and knowingly organised and executed the nomination process for the respective positions starting from county assembly representative, MP, women representative, senator to the governor,â€ he said.

Kamotho made a name for himself between 1990 and 2002 as Kanuâ€™s longest-serving secretary general. Kamotho is remembered for his titanic battles with the late John Michuki as they engaged in political rivalry for the Kangema seat between 1974 and 1992 with late Michuki one time describing Kamotho as â€œterrible little manâ€.

In Murangâ€™a, Kamotho is remembered for marshalling Kanu politicians in conducting fundraisers for churches and secondary schools as platform to attack his rivals endearing himself to the Moi regime.

He was minister for the Education, then Trade, Environment and Natural Resources. He was the fifth secretary general of Kanu.
More to follow>>>