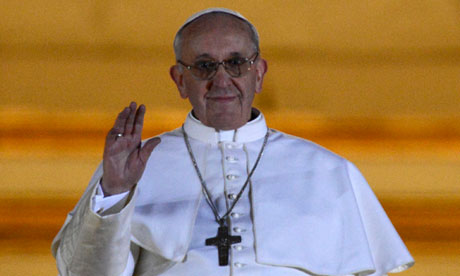 Cardinal Jorge Mario Bergoglio, who has become the Catholic church’s 266th pope, is the choice of humility, a Jesuit intellectual who travels by bus and has a practical approach to poverty: when he was appointed a cardinal, Bergoglio persuaded hundreds of Argentinians not to fly to Rome to celebrate with him but instead to give the money they would have spent on plane tickets to the poor.

Something of a surprise choice â€“ he was quoted as a 30/1 outsider going into the conclave â€“ the archbishop of Buenos Aires was one of the leading challengers to Joseph Ratzinger during the 2005 conclave that elected the latter as Benedict XVI.

A champion of liberation theology which some thought might have been too much for conservatives in the Vatican, he nonetheless is considered a candidate that everyone in the higher echelons of the church respects. He becomes the church’s first Latin American pope.

Much is made of his humility: he gave up the grandiose setting of the cardinal’s residence in the Argentine capital for the trappings of a small apartment, and rejected the notion of a chauffeur driven car for public transport.

Bergoglio, who will take the name Francis as pope, was born in December 1936, one of five children of an Italian railway worker. He taught literature and psychology in Argentina before being ordained in 1969. He was created a cardinal by John Paul II on 21 February 2001.

Unlike other cardinals, he has been untarnished by the various scandals rocking the Catholic church, and is thought to want to make reform of the Curia a priority. He was a fierce opponent of Argentinas decision to legalise gay marriage in 2010, arguing children need to have the right to be raised and educated by a father and a mother. But he takes a slightly more pragmatic view on contraception, believing that it can be permissible to prevent the spread of disease. He is ecumenical, believing in interfaith dialogue.

In 2009 Bergoglio made headlines when he criticised the government of Ernesto Kirchner, husband of current Argentine president Cristina FernÃ¡ndez de Kirchner, claiming it was “immoral, illegitimate and unjust” to allow inequality in the country to grow. “Rather than preventing that, it seems they have opted for making inequalities even greater,” he said. “Human rights are not only violated by terrorism, repression or assassination, but also by unfair economic structures that creates huge inequalities,” he said at the time.