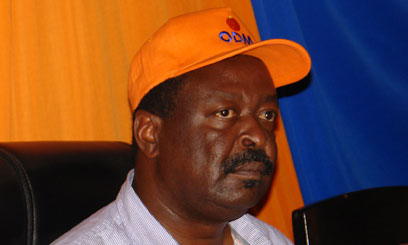 Nairobi based management consultant and former head of Raila presidential campaign secretariat Mr. Eliud Owalo today urged Amani coalition kiosk leader Hon. Musalia Mudavadi to reach out to Raila Odinga and join forces with the rest of the opposition, governors, MCAs, the church and the civil society to push through the Referendum agenda.

Speaking to tens of thousands of youth who had gathered at the Pentecostal Assemblies of God(PAG)Church headquarters in Nyangori, Vihiga District, during the annual Youth Convention,Mr. Owalo stated that the issues that have necessitated the Calls for a referendum such as devolution,insecurity,unemployment,cost of living and tribalism transcend political party boundaries and should therefore be supported by all Kenyans irrespective of their political parties of affiliation.

He appealed to Hon. Mudavadi,who was present,to rejoin his brothers and sisters in the opposition fold,noting that Mudavadi is too senior politically to play second fiddle to Uhuru Kenyatta and William Ruto,noting that a combination of the Amani Coalition and the Okoa Kenya movement can emancipate Kenyans from perpetual bad governance by pushing through the referendum to facilitate the third and final liberation of the country.

Owalo further to castigated the Jubilee Government for perpetuating tribalism in the country,noting that for the first time since independence,there is no cabinet minister from the hitherto western province in the national Government.