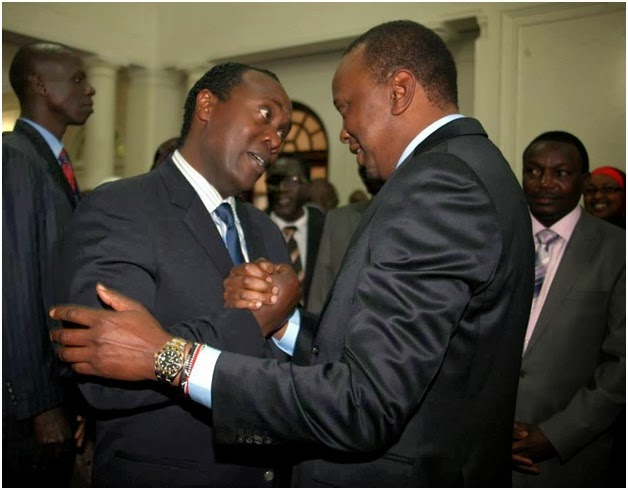 Instead of Jeff Koinange pairing Ngunjiri Wambugu and Phil Etale; he should have just given Eliud Owalo a call…so that the two can tell the country the ‘extra-ordinary’ circumstances they worked in (if in deed they ever worked) when they called the shots in ODM, and CORD. I know of folks who wish to know te exact nature of work these two did.

I can’t just stand the ‘image’ of Ngunjiri on one side bashing ODM and Etale on the other defending ODM. Zero-sum game. ODM still becomes the object of ‘public odium’. Bashed by one group; defended by another. Here is the game: Because Ngunjiri has been in ODM, Jeff Koinange’s ‘audience’ will believe him to a man. This Koinange audience is an Uhuru-Ruto audience. Nothing excites them more than an ODM down.

One wonders, this is EXACTLY a year since Uhuru took over power with very grandiose promises. As he is busy holed up in an exclusive luxury resort in Mt Kenya where a bed a night (no breakfast) is Ksh 55,000 for their aides! Guess how much this government is ‘gonna’ spend for three days? Back here, you wake up only to get public transport system in Nairobi grounded.

You are stuck in traffic for eons. You are more worried of your job. Your ‘duly elected government’ (at the same time) is on ‘vocation’ in one of the most exclusive hotels in Kenya. Eating buffet! Drinking bottled water! Celebrating a year in power!

Jeff Koinange should be interviewing President Uhuru, not Ngunjiri and Etale. Jeff Koinange, however, knows what he is doing. He is covering for Uhuru. The King is naked. A year later, the dream is elusive. Was there any dream? In the first place? This Jeff…his work is to create a media distraction so that people don’t hold his pay-masters accountable.

And your so called ‘national media’ is an accomplice in this worst Jubilee nightmare. People should ask themselves: Why did the Matatu industry in Nairobi; owned and controlled 100% by characters aligned to this Jubilee government decide to go on an ILLEGAL strike today? A day when the whole UhuRuto government is holed up in Mt. Kenya? This is it: to distract you.

To make you “catch hell” whenever you see Dr Evans Kidero who, should he attempt to reign in these guys, will see hell on earth. So this Jeff Koinange interview? It is just PART of the whole script. The public spectacle of ODM “botched” elections has been propagated by your national media to levels that it has overshadowed everything.

In mature democracies, a national media worth its salt would be putting all its lenses on a government celebrating its first anniversary in power. It would be asking all ugly questions. Demanding all ugly answers. Putting the national conversation to tune with that government’s remarkable achievements, or, if any, failures.

But here is a ‘digital dream’ one year in power that’s worse than an “analogue nightmare” and so packaged by the likes of Jeff Koinange. Oh, iBelieve Kusema na Kutenda. Oh, pamoja twasonga mbele! This Jubilee government, this Jeff Koinange’s government, friends, is very similar in mannerism to the nightly government on Koinange street: both are well-packaged!

So, for people like Jeff, and your ‘national media’; we better be spending precious TV time watching ‘a’ Ngunjiri and ‘an’ Etale. Clueless pawns. Nonentities. Nondescripts. Hahahaha. Rich Media, Poor Democracy. â€ª