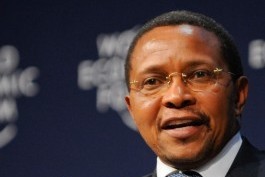 Tanzania’s President Jakaya Murisho Kikwete was accorded a stunning ovation in his tribute to the late Nelson Mandela.

President Kikwete’s speech made shame of Jomo Kenyatta regime that failed to help ANC set base in Kenya. Kikwete highlighted the support given by Mwalimu Julius Nyerere to the struggle against apartheid in South Africa.