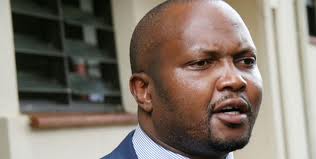 Late last week, Senate authorities took over all the office space in KICCâ€™s first, second, third and fourth floors, thereby swallowing the offices of the secretary of public communication and its entire orphaned staff. Sources said cold-stricken Kariuki made desperate attempt to seek office space at Jogoo House but was turned back. It is not clear where he will relocate to, but it appears some ramshackle hovels in the run-down Nyayo House might offer them temporary asylum.

Even then, theÂ incoherentÂ man who is supposed to speakÂ eloquentlyÂ for the government should not try hard to find a new office. He will soon be leaving, either to inflation or back to the dusty Ministry of Information offices. Either way, it is a slippery slope for him. It is a sad journey.

Meanwhile, TNA strategist Moses Kuria, who is reportedly lobbying to be the government spokesman, reportedly stampeded into the now vacated offices last Thursday and sought details about its operations in preparation to settle, should President Kenyatta hire him.

Well, even if he does, then he will seek another office to do government spin. â€˜â€˜Moses Kuria was here,â€ a source told the Jackal News. Well, may the Heavens will hear Kuria this time.

One thing for sure is Muthui, who was reportedly offloaded by retired President Kibaki because of his shady drinking habits, dumped in the offices of the now jobless former Vice-President Kalonzo Musyoka, then tossed to the spokesman offices when Alfred Mutua fled to seek the more lucrative Machakos County governor.