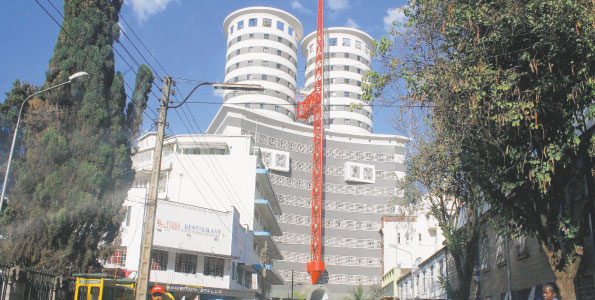 By: Robert Alai (published at http://omundukhumundu.wordpress.com)

So one of Nation Media Groupâ€™s senior writers, Murithi Mutiga, has got angered by my criticism of the media house that he has decided to dedicate more than half of his lousy column to attack me. It might also be that desperation for his article to be so shared on social media drove him to have me featured as the subject in his column. It is not clear if Mutiga is so personally angered by my Tweets and Facebook posts or he is also acting on behalf of the media house. It is not usual for media houses to allow personalised attacks or response to people as inconsequential as Robert Alai on their stables.

It seems that Nation Media Group have no problem with that or they wanted to send a message by targeting a person. My issue with Mutiga goes beyond a single post r tweet. It goes far back as the year 2007 when the media house was a platform of hate for anybody who was not Kikuyu or supporting PNUâ€™s Mwai Kibaki. That is why it is hard for the media house, especially their print products, to accept a feature of Robert Alai in any of their verticals.

As late as within the last 3 weeks, Mutuma Mathiu (Managing Editor â€“ Daily Nation) blocked the publication of an article in Zuqka pullout which had me featured. Despite the sub-editor and one other editor disagreeing with Mutuma, he had his way. The concerned editors told me that Mutumaâ€™s only reason for blocking the story was, â€œyou have personal differences which goes way back.â€ I brought this to the attention of both the Managing Editor at NMG, Joseph Odindo, and the CEO, Linus Gitahi.

A week after getting info about Mutuma Mathiu blocking the Zuqka feature, I received information from a friend that NMG is using a top senior spy to monitor the movement and communications of one of their former employee who moved to The Standard. I called Linus to asked him about all the info and during the conversation I asked him about why a personal difference with an editor influence the editorial standing in a media house like Nation. Nothing which Linus said was convincing and he had even to dangle carrots like, â€œRobert, you know that if you guys organise a bloggers conference, we will sponsor it.â€ I wondered if I showed any desperation for a bloggersâ€™ confence sponsorship while speaking to Linus. Later I realised that he had a different way of wanting to deal with critics like Alai.

But seeing what Mutiga has written about me today, I asked one of the most senior media practitioners what he thinks of NMG honestly and them dedicating a whole column to criticise me. The friend said, â€œyou really angered them and I know one who is not happy that you get so much insider info on them. Be careful because Nation Media Group is very vengeful. But ethnicity and chauvinistic reporting is where they sit. They have never looked as professionalism as a virtue.â€

With this and a further confirmation from a friend still working with the media house on what they do has me convinced that I am trying to fighter a python in NMG. It is dangerous because it gets vicious the moment you start fighting it. The following articles I wrote about NMG and their skewed reporting has surely ruffled feathers and I will continue doing. Small mongrels sent to scare me are not reason enough for me to stop changing Kenyan media. It is painful but we must do it.

But let me briefly look at Mutigaâ€™s article on Robert Alai Onyango. First he criticise me for assuming his political inclination by looking at his last name while he also assume my political inclination by looking at the same. That is why he goes through the painful process of explaining who his mpango wa kandos, mutura peddlers and village childhool friends support. He believe that he must convince me that he mean well for Raila just by assuming that since I might be Luo (looking at my last name), I surely would support no one but Tinga.Â

Again Murithi shows lots of childish traits when he really want us to believe that with IT, tribalism is cured. Like assuming that with Thika Road being made a â€œsuper-highwayâ€, all Kenyans feel fairly served. NMG claim of professional training for its TOP editors like Mutiga and Mathiu has not killed tribal chauvinism in them.

While I was reading the Mutigaâ€™s vitroil on me, I saw this tweet;

When a friend left The Standard Group for NMG some time back, I told him that it is almost impossible for an average Kenyan to realise that the former (STD) is owned by former President Moi. It is so hard because of the editorial independence in the media house. Unlike NMG where politicians, tribal gods and corrupt business leaders run the show. It is a tragedy that one of theÂ largestÂ media houses in the region is so myopic in choice of preferences.

I will not please an individual, tribe or society while criticising. I will honestly criticise and stomaching it or not stomaching it becomes your choice. That is a painful reality that all must live with.

Again you remember Nation recently photoshopping a Ruto image over CORD rally crowd? Their explanation was it was a technical error. Imaging NMG taking us to be that foolish to think that photoshop can be that easily executed that errors can be so common.