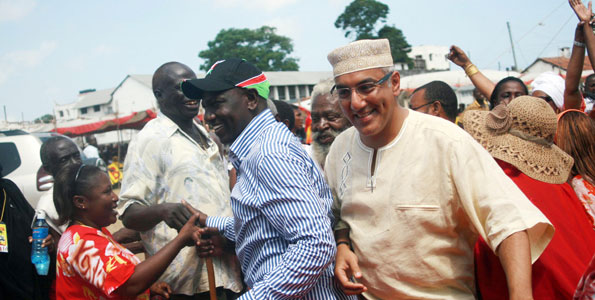 There are simmering tensions in the Jubilee Alliance following eruption of long standing differences between William Ruto and Najib Balala, our source can exclusively report. Information reaching our desk shows that the two have been engaged in cold ideological wars for some time now and the differences have been heightened over the control of Uhuruâ€™s campaign cash that is said to run into billions of shillings.

Our sources have intimated that the differences between the two started during the constitution making process where Balala was pushing for Majimbo or Regional system of governance. When the Parliamentary Select Committee retreated to Naivasha to finalize among other issues, the form of devolution government, Mr.Ruto is said to have played ball with the Mount Kenya Mafias and agreed to the adoption of a county system of devolution as opposed to the hitherto agreed Regional system that would have seen the previous eight provinces converted into regional government. The quest for regional governments was so dear to Balala because he intended to use it as a trump card to consolidate his stature in Coast Province.

From that time Balala has always perceived Ruto as a traitor and the worst enemies of the Coastal people.Matters were not helped when Ruto picked on politicians Balala considered political novices to be his point men at the coast including Chirau Makwere and Kazungu Kambi both of whom hail from Kwale County. Balala holds the view that the propping up of the otherwise political nondescripts by Ruto to spearhead Jubilee campaigns is an attempt to defeat his quest of marketing his newly formed Republican Congress. Indeed at the time of the formation of Jubilee Alliance, William Ruto is reported to have dispatched his foot soldiers led by Kazungu Kambi to oppose the inclusion of Balala into the Alliance. Mr. Rutoâ€™s move is said to have been engineered by the inclusion of Balala into the Burundi trip with Uhuru Kenyatta and to underpin his displeasure with the move, Ruto skipped the Burundi trip.

In a thinly veiled attack, ostensibly on the instructions of Ruto, Mr. Kambi accused Balala of forcing himself into the URP-TNA alliance.

The MP said the Mijikenda would not allow Balala to represent them in the alliance since he was a latecomer.

â€œBalala has been out of this alliance when we were fighting the enemy,â€ Kambi said and accused the Mvita MP of trying to reap fruits unjustly by riding on the allianceâ€™s alleged popularity in Coast Province.

He added, â€œNow that the food is ready he wants to join the feast. We Mijikenda cannot agree to play second fiddle to any politician or person.â€

The choice of words in this altercation was well measured and the objective our source has revealed was to isolate Balala as an outsider in Coastal politics and therefore one who could not champion the interests of coastal. Indeed Kambiâ€™s assertion that the Mijikenda were not ready to pave way for Balala was telling.

Reports now indicate that Mr.Ruto has indeed succeeded in isolating Najib Balala in the Jubilee Alliance especially with regard to the conduct of Jubilee Rallies at the Coast. At a jubilee rally at Tononoka on 22nd Dec 2012 where Jubilee leaders used huge amounts of money to ferry crowds to their rally, Mr. Ruto is reported to have barked at Mr. Balala as a good for nothing political parasite who could not master to even mobilize a baraza in his own backyard.

Just three weeks ago when Uhuru and Ruto addressed rallies at the Coast, Balala was not involved in planning of the rallies instead this duty was assigned to Danson Mungatana and Kazungu Kambi. Our sources have revealed that while Jubilee candidates are sufficiently funded by the Jubilee secretariat in their campaigns, candidates running on Najib Balalaâ€™s Republican Congress party have been left hard and dry and many of them have resigned to losing the seats without a fight. To further complicate the icy relation between Ruto and Balala was the latterâ€™s decision to register a party using the name â€œRepublicanâ€ which did not go down well with Ruto who had already invoked use of the name and felt Balalaâ€™s use of the name was only calculated to confuse the masses and erode the popularity of the United Republica Party. It is now reported that the relationship between the two has hit rock bottom and more oftnely, the two only meet in the presence of Mr. Kenyatta and Jubilee strategists now fear the differences between the two may boil over to the grassroots and there are every indications that it is only a matter of time before the two part ways.