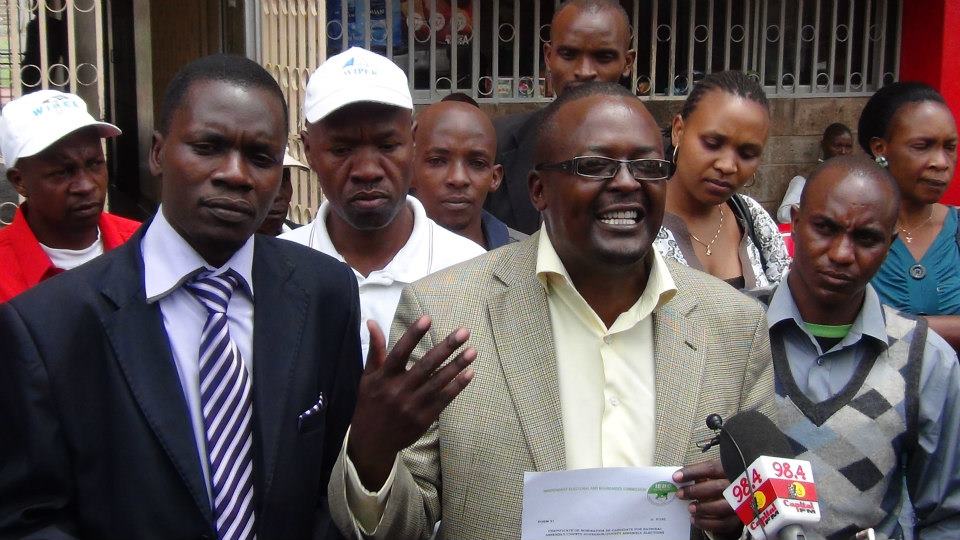 To the masses in Embakasi, Kavemba is the real â€œBaba Yaoâ€ as he was the face behind the successful CDF projects in the constituency. Whereas Hon. Waititu was busy throwing stones, Mr. Mutinda Kavemba the outgoing secretary of CDF made sure all was near perfect in the constituency office.

Kavemba is credited as the professional who made the otherwise chaotic constituency shine in the utilization of CDF funds; he put in place systems that worked even when Waititu was busy attending to other matters.

Embakasi constituency residents hoped that in the race for governor Hon. Waititu was to pick Kavemba his CDF secretary to replicate the success in entire Nairobi, the move could been a safe bet to compliment the wanting management experience of the TNA aspirant.

Kavemba (37), a former Maseno university student leader is well respected by his peers, who describe him as a straight forward, no nonsense management professional who always strives to outperform the best in whatever he sets his eyes on.

Kavemba is a public figure, and in the mucky politics of Nairobi he served as a councilor of Umoja Ward between 2002 and 2007, he also served in the Nzamba Kitonga led Committee of experts as a regional coordinator of civic education and currently as the outgoing secretary of the secretary of Embakasi constituency CDF.

â€œIn the race for Nairobi governor, Kavemba has encountered a series of barriers elected by his competitors who were scared of his ability to mobilize the lower cadre of Nairobi voters. It was a struggle to get Wiper Democratic Party certificate and secure a IEBC clearance certificateâ€ his running mate Fwamba NC Fwamba said.

It was against many odds as some unseen forces had ensured that he doesnâ€™t get cleared to run. Kavemba’s close friends and associates say he has a strong spirit in fighting for justice, in this election especially at party nominations stage he found an opportunity to fight for his own rights.

Even after winning the WDP nominations Kavemba was denied the certificate by unknown forces, the matter went to the IEBC tribunal, it was ruled in his favour. Even after the Tribunal ruling, he had to obtain a court order to allow him to present his papers with or without the WDM-K nomination certificate.

His ticket was strengthened when he appointed the 33 year old former firebrand Vice Chairman of the Student Organization of Nairobi University (SONU) and human rights defender Mr.Fwamba NC Fwamba as his running mate.

Fwamba NC Fwamba is a brand name in the political circles in Nairobi; he is known for his ability to mobilize the youth in Nairobi and is one of the emerging leaders in our country.

For the past several weeks the duo have combed in the Nairobiâ€™s Eastlands area where they have held caucus meetings and set up a series of campaign cells. They hope to pull a surprise on the leading candidates in the March 4th polls.

It was rumoured that Jimna Mbaruâ€™s supporters were already warming up to Kavemba, were Mbaru to drop out of the race after he was publicly humiliated by Uhuru at Jubilee’s final rally. If Mbaru throws his support behind Kavemba, it will be a game changer that will put an end to Kidero and Waitituâ€™s ambitions.