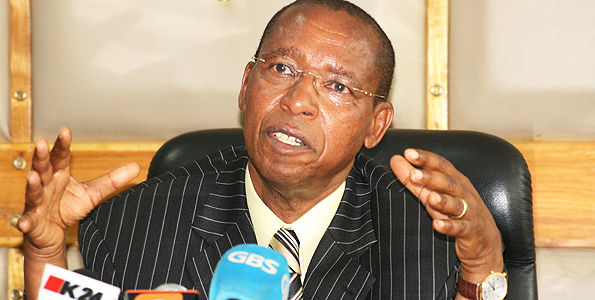 When news of the death of Kilonzo first appeared on the mainstream media, I got lost in it for a few hours. When I finally gained my pedestal, I made one post on my facebook timeline which simply read: ‘I will not mourn Mutula Kilonzo. Period.’ Well, I received quite some flak from friends and strangers alike.

To my close friends and those who’ve lived around me to know what I care most about or hold dear; they know the demise of Kilonzo is not one of them.

Now, to strangers and other feeble characters who escape to my wall to get a bearing for their own lives, it is indeed shocking that I remain indifferent even as the ‘whole country’ is engaged in mourning.

I will never castigate anyone feeling sad tonight. I will not want to know why; and I never pass judgements.

Mourning is a very personal affair. In this information age, we have mourned every passing leader, whether Kenyan, African, or the world. We have mourned even those still alive. we recently mourned Margaret Thatcher even when her own country celebrated her death with beers and so forth.

So why am I not mourning Kilonzo?

I am not mourning Kilonzo because I made it a point not to mourn when the dead object does not agree with my living spirits, and yes, Mutula does not.

Having been a student leader, I have come up close with disciplinary cases involving students. After a year of sitting in these committees, I came to empathize with student leaders who served a decade ago at the height of Moi’s and Kanu rule, particularly in the ’90s.

One particular case is worth mentioning. The case of Christopher Owiro and 300 other students Vs the University of Nairobi.

Around the 28th November 2000, students convened an informal meeting, kamukunji, at the University of Nairobi to protest the introduction of the parallel degree programme. The feeling then was that the programme would deny bright and needy students a chance to pursue higher education as well as dilute university education itself.

Needless to say, the event degenerated into a riot. The University closed the following day and SONU was disbanded. Thereafter, there were suspensions and expulsions. When it opened in 2001, Marx and others had been axed. They took the University to court.

The university lawyer then was Mutula Kilonzo. This very dead Mutula Kilonzo. Appearing before Justice Kasanga Mulwa, this good lawyer argued that these students should even be suspended for 55 years! The man who represented these students was Erick Mutua, the current Law Society of Kenya Chairman. As was expected, the judge stayed the decision of the University and the students proceeded to the court of Appeal.

In the Court of Appeal, Justices Samuel Bosire (found unfit by Judges and Magistrates Board) , Phillip Tunoi (now in the supreme court), and Emmanuel O’kubasu again upheld the decision of the lower court.

Mutula Kilonzo spent the better part of his illustrious career entrenching the skunk that today pervades so many sectors in the governance of Kenya. A late newcomer in the reform process, he was part of the brains which negotiated a heavily imbalanced power-sharing accord which led to a rancorous grand coalition government in which he was awarded with a ministerial position.

Until it was clear that the Jubilee Alliance, the G7, would not nominate Kalonzo Musyoka for the presidency, Kilonzo was very much a pro-establishment intellectual care-giver.

As to whether he deserves to be remembered as a reformist, I leave such niceties to his pack of irrational mourners, and people who lack the core to put his past in the political context where it belongs.

There are cases in this country which had Kilonzo chose to advance the rule of law and positive jurisprudence, Kenya would have made massive leaps in the manner those in government handle public properties and human rights.

So in all fairness, let those who mourn him wipe their tears in sombre ululations, however, let those of us denied the luxury of shedding crocodile tears by knowledge and appreciation of the checkered past of the fallen legislator toss champagne (if you can afford) and breath a sigh of democratic relief, knowing so well that nature has rebalanced the earth.

This is a sad week with spasms of celebration by true revolutionaries. As they say at the University, “a comrade is always right”!