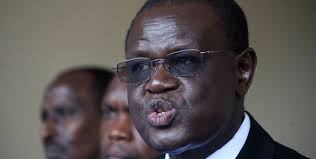 Former Imenti South member of parliament Kiraitu Murungi had a rare embarrassing moment in Feb 2008, As members of the 10th parliament were being sworn in, there was intense debate in the house as to whom they should pledge their allegianceÂ  to; Raila Odinga or Mwai Kibaki.

Ugenya MP James Orengo was on a point of order when Kiraitu- desperate to defend Kibaki stood up and interjected against the house rules. Orengo in a short sentence put Kiraitu off “I am on a point order, you ought to learn your rules again….” the remark send both sides of the house into laughter.Â  Just watch the Video