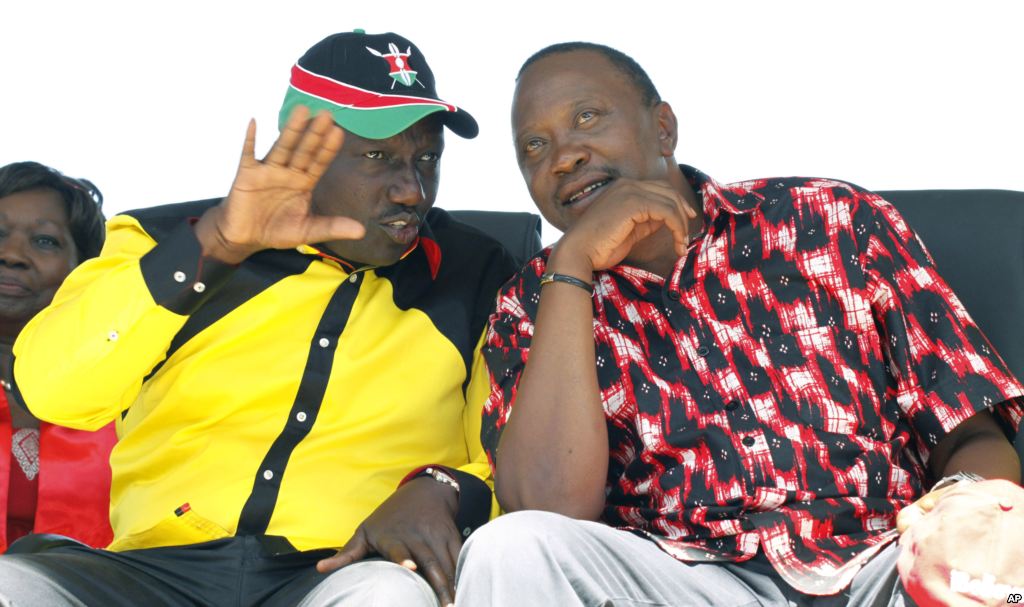 Top TNA patrons think Jubilee running mate William Ruto is too ambitious and have laid out an elaborate plan to cut him down to size if their coalitions wins the March 4th elections. The elites and politicians driving Uhuruâ€™s campaign are wary of Rutoâ€™s ambition and believe it could cut short their plans to enjoy Uhuruâ€™s stint as President. It is the same group that prevailed on Uhuru to rescind his decision after he announced he would step down from the Presidential race and support Musalia Mudavadiâ€™s bid.

Although the plot has been widely discussed within this circle, the top elite politicians who have been pushing for the idea decided to stay mum in order not to stir resentment for Uhuru in Rift Valley until a leading Kiambu politician let the cat out of the bag last week while on the campaign trail in Thika. The candidate didnâ€™t realise that the microphone was on and was caught off guard murmuring expletives about Ruto. â€œHe is a murderer who killed our people in Rift Valley and he will not be allowed to get away with it. He should wait and see what happens after the elections,â€ said the politician.

Uhuruâ€™s top advisers are especially worried about a Constitutional provision that states the Deputy-President will automatically take over as President and finish the rest of the Presidential term in case the Head of State to finish his term or vacates office before expiry of his term. They have continually cited Rutoâ€™s relationship with Prime Minister Raila Odinga, which started to become sour immediately the former was appointed to a plum post in the Government by the Odinga.

â€œHe was given the ministry of Agriculture, which was the best ODM got under the Coalition Government, but was never satisfied. Even after ODM amended its Constitution and appointed him its deputy leader, he still had complaints. We believe it will be the same once he gets into Government with Uhuru. We wouldnâ€™t allow him room to destabilise us,â€ says a top political consultant who requested not to be named because of the sensitivity of the matter.

Uhuruâ€™s top advisers plan to use the numerous Court cases Ruto is facing to either silence him into submission or throw him out of the Deputy-Presidential seat once Uhuru is elected into office and have cited a land case pitting the former Agriculture minister against a squatter as having good prospects of succeeding. â€œWe will invoke the provision that states a public officer accused of criminal act must step aside and allow investigations to be conducted. I can assure you he will not find his way back once he steps out,â€ added the consultant.

Ruto is regarded as the King of the Kalenjin and his endorsement of Uhuruâ€™s candidature is widely expected to tilt the Kalenjin votes in Uhuruâ€™s basket. The Kalenjin are one of the bigger tribes in the Rift Valley, and they have fought fiercely with the Kikuyus before, mostly over land. Although the union between Uhuru and Ruto-who are both facing charges of crimes against humanity at Hague-based International Criminal Court (ICC) was partly designed to hoodwink the Court that peace has returned between the Kikuyu and the Kalenjin, some of Uhuruâ€™s advisers plan to force Ruto to lead a campaign to return the land that was taken away from the Kikuyu who were chased away from the Rift Valley â€˜back to the rightful ownersâ€™. â€œWe can still remember villages going up in smoke in Rift Valley.

In Kenya, land belongs to the person with the title deed and who has the title deeds for the lands where IDPs were ejected? â€ Posed the consultant. The election â€” and the unresolved battle about who won the 2007 Presidential electionâ€” ignited old tensions in Kenya, which went from being one of Africaâ€™s most promising countries to a trouble zone. The last time the Rift Valley was this violent was in 1992, another election year in Kenya and a time of turbulent transition between dictatorship and democracy. The battles pitted the two tribes, which have perennially fought over land against each other.

Many Kenyans are however in agreement that this yearâ€™s election will be peaceful, it will be a close election but we expect the leading loser will concede defeat or at least follow legal channels. Raila has a high international standing to ruin it, Uhuru who is facing charges at the ICC is also likely to concede defeat as he may not want to injure his already bad situation in the Hague.