Apart from democracy emblems like the White house and the Capitol Hill which houses the President of the United States and the congress of that country respectively, DC is a living history of an ever evolving American democratic story.

As a young student interested in my countryâ€™s history, my mind often wandered off back home whenever I saw how that city used the liberal arts to rake in millions of dollars of international visitors and tourists.

I thought about which town in Kenya is capable of using its history, and the history of its indigenes, to grow and become an African version of the District of Columbia. I came to the conclusion that Kisumu it is!

In DC, you do not see the big industriesÂ Â with smoky fumes and long lines of the â€˜reserve armyâ€™ of workers marching in big buildings for work and wealth. At least, if there is, then those are not the attractions. The buildings houses bureaucracies, federal agencies and whatnot.

DC is an art city, where the liberal arts and social sciences have merged with architecture to develop monuments and iconic buildings and structures where the political and industrial treasure of a nation is kept for humanity to see.

The major attraction in DC is the National Mall, a national park with ten museums of the Smithsonian institutions, national monuments and memorials, the Capitol Building, the Natuional Gallery of Art and the U.S Botanic Garden. It is the monuments and memorials at the National Mall which really captivated us. We visited the Lincoln memorial, the Jefferson Memorial, the Martin Luther King monument and saw J.F Kennedy and LB Johnson.

Washington, DC is a city of monuments and memorials. It is a city build to honourÂ Â the generals, politicians, poets, churchmen and statesmen who helped shape a great nation. In every street corner, you are bound to find a statue or a plague of some â€˜great americanâ€™ whose contribution to the making of the worldâ€™s most powerful economy and democracy continue to inspire many outside its borders, and who, like this young Kenyan student, hope for a return tour.

Next to the building which houses the National Academy of Science, I finally took my turn in front of Albert Einstein; that great German scientist who emigrated to USA to escape Nazi madness.

The difference we saw in DC, and in many cities across America, is that they honour â€˜trueâ€™ heroes; or at least, people whom in their contention deserve to be honoured. In small town hall meetings, we saw the mayors and council-members honour youths and ordinary people who did extra-ordinary things in their neighbourhoods.

At the national level, each region has strived to honour their sons and daughters. When we visited Boston, again, we saw the same ingenuity of the arts. Tour guides took us to every hook and cranny, including the cemetery where we were shown the grave of one â€˜great American and Bostonianâ€™ called John Adams.

As our country begins the next fifty years, and this was realized the other day by father of modern democracy, Raila Odinga, the next fifty years will be county years. The next big inventions and innovations and progress are going to be realized at the county level. This is where my hope for Kisumu county comes in.

In the last fifty years, they consistently robbed Kisumu city to pay Thika town. If not Thika, they took everything to Nairobi.

In the next fifty years, with devolution, Kisumu now stands a new chance to rebuilt itself. We are witnessing the last gasps of a dying pathology; a bitter past. Kisumu can build its industries and an expansive social service sector.

Because of its history and flirting with kenyaâ€™s democracy, Kisumu can uniquely build its own monuments and memorials. It has seen its bitter deaths. It has overcome the Moi era relegation and within a decade in this new millennium, the city has shown signs of â€˜coming to birthâ€™.Â Â The city can build a model historic mall and honour all those whom Nairobi has refused to honour.

From great sons of the soil to noble visitors, Kisumu carries with it a history of a country which ended white colonialism only to get enslaved in black colonialism. Kisumu has seen guns and teargas and police dogs. From 1969 to 2013, the county and the city has its bitter stories. Stories which need to be kept in a museum for the custody of future generations and in memory of past generations, many of them, fallen.

The city can build its own Jaramogi Oginga Odinga Memorial, with a lanky image of the doyen of opposition politics; it can have too in each street corner a statue of many of those great legends of yore and masters of the yesteryears. It can honour its musicians, like Okach Biggy; its poets, its politicians, its churchmen, its military soldiers, its educationalists, its â€˜friendsâ€™ like JM Kariuki or George Anyona.

But more especially, Kisumu must dedicate a corner to the unfinished political work of democracy. It must remind its current generation that the assassinations, long jail terms, detentions, expulsion of many of the countyâ€™s men from the military, expulsion of many former bright and daring student leaders from the university, and lecturers too. . .all these work are unfinished both in that region and in our country.

Democracyâ€™s greatest hopes are most at danger today as it were at the onset of our countryâ€™s independence.

Kisumu holds a historical treasure which it can use for social tourism. There is no reason why the county of Governor Jack Ranguma should not be the next Washington DC with monuments and memorials which shall attract visitors from far and wide; from Lunga Lunga to Loitoktok.

We who grew up after nature, and the duplicitous politics of Kenyatta senior and Moi had taken its toll on Jaramogi Ajuma. We would want to see him again, publicly displayed for history, and whenever we find democracy threatened, we only need to look at this and many other great Kenyans of his ilk, to forge ahead! A county Mall will serve this purpose.

The contribution by the arts, more than the sciences, may be Kisumuâ€™s joker card! Because they cannot cheat history any more with fake heroes and fake monuments, we now have a chance to â€˜unveilâ€™ our true heroes and heroines for the next fifty years and eternity.

Over to you, Jack! 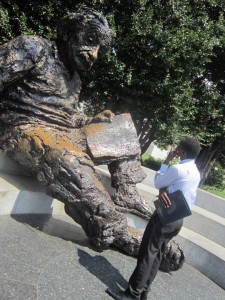 The writer in front of the statue of Albert Einstein at the National Academy of Sciences. Washington, DC.