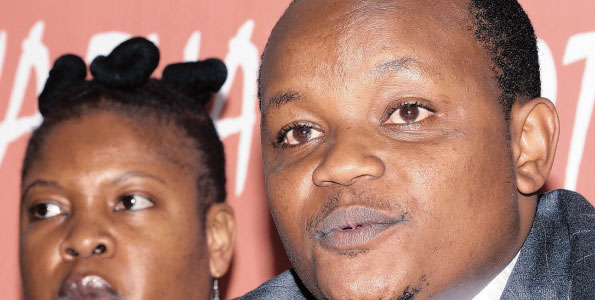 In the photo Ngunjiri Wambugu accompanied by civil rights activists and member of committe of experts Atsango Chesoni at a past press conference
Former ODM strategy official Ngunjiri Wambugu today attempted to defend embattled Nyeri Women Representative currently under the radar of Jubilee bloggers and found himself being reminded that he fucked up long time ago.

Matsanga led the chorus, bluntly telling Ngunjiri to ‘not forget’ how he participated in fixing President Uhuru Kenyatta.

Ever since leaving ODM, Ngunjiri has been spending his brawns leading a hollow one man onslaught at the ICC through his column with the Star Newspaper.

All those attacking â€ª#â€ŽPrsicillaNyokabiâ€¬ for the work Kituo Cha Sheria did, are actually very shortsighted.

Do you realize you are giving ammunition to those NGOs using international platforms to argue that this government has been interfering with the process? Do you realize you are telling the world that Uhuruto bear grudges, and will collect? Do you realize you are contradicting the Uhuru & Ruto reconciliation which has happened despite them being at the ICC as protagonists .. supposedly because of what ‘their people’ did to each other? yet you, who are not even directly involved in Uhurus’s tribulations, are out there attacking those you believe ‘fixed’ him? What does that even mean!!!

Do you realize you could easily be giving Bensouda ammunition to take back to Court in support of her request for indefinite adjournment .. especially those associated officially with security agencies in Kenya? What stops her from telling the Court that the Kenyan government is harassing people who supported the Court, and discouraging others indirectly? What stops her from arguing that GOK has something to hide?

73% of Kenyans supported the ICC process at one point. I personally went out to collect signatures to keep us in that process. Today ICC support is down to low 30s; meaning over half of those who supported the ICC don’t support it any more. Will you also attack all these 16+Million Kenyans who at one time supported the ICC and have now changed their mind?

All of you are not doing â€ª#â€ŽUKenyattaâ€¬ a favor; infact you are actually making things worse.

Dennis Itumbi, the chief government blogger, reminded Njunjiri that facts are facts and that Nyokabi wrote a letter to the ICC during confirmation of charges hearing.

Matsanga went full blast, reminding Ngunjiri that he is also part of those who fixed Uhuru. Ngunjiri was then patron of an outfit called Kikuyus For Change, composed of ex-Mungiki sympathisers.

“where did this goat come from? I HAVE NEVER, NEVER HEARD OF SUCH A STUPID PERSON LIKE THIS THIS TURNCOAT WHO IS NOW COMING TO THE DEFENCE OF THOSE WHO HAVE FIXED OTHERS IN THE PAST LIKE HIM. HE NOW KNOWS THAT NEXT WE SHALL EXPOSE IS WAMBUGU NGUNJIRI A A FORMER RAILA ODINGA APOLOGIST AND NOW HAS COME TO DESTROY US FOR THE MONEY HE MADE IN ODM WHEN HE OVERSAW THE DESTRUCTION OF THE LIVES OF ICC SUSPECTS. NGUNJIRI IF YOU HAVE TURNED FROM DAMSCUS TO JERUSALEM AND NOW YOU ARE IN JERUSALEM DONT FORGET WHAT YOU DID ON THE WAY. I HAD SPARED YOU BUT FROM NOW WE UNTIL WE PART WAYS I WILL DESTROY YOU AND I THINK THE GLOVES ARE OFF!”

WHICH EUROPEAN COUNTRY FUNDS YOUR NGO NGUNJIRI? YOU EVEN BOUGHT A HOUSE IN KAREN? HOW IS YOUR ACCOUNTABILITY?

Now I know why my Pan African brother President Uhuru Kenyatta will be in trouble because of people accepting you and creating an outfit for you to spring on me who and attack me who has fought a batttle against you since 2008. Ngunjiri your fight is against Deputy President William Ruto whom you allegedly and falsely accused and delivered at The Hague while in ODM and not me matsanga. I did not kill anybody in the Rift valley and or Eldoret or anywhere in Kenya, I just defended the 3 guys who were falsely accused . When you threaten us that Fatou Bensouda will use it you forget it was given by Nyokabi already. That is why you have been brought in and dont try me again and I have always told you please let us fight for Kenya , not tribes or individuals- because that mentality was ODM and that is why you will find a big wall in this new outfit of yours and you might need a friend like matsanga an outsider to help you ok take that free advise. Leave Nyokabi to me and I will also fix her dont cross my line sir