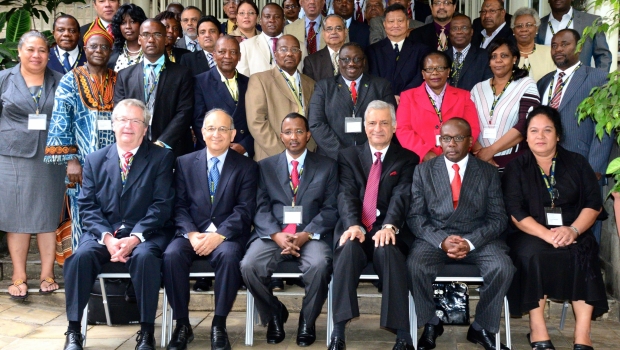 Independent Electoral and Boundary Commission (IEBC) public relations have gone overdrive with the news that the biennial Commonwealth Electoral Network (CEN) conference which ended in Nairobi this week has seen the IEBC Chairman, Mr. Ahmed Issack Hassan taking over as the Chairman of CEN Steering Committee from Mr. Marc Mayrand, the Chief Electoral Officer of Canada.

To being with, Hassan is taking over Chairmanship by virtue of the fact that the position is rotational among member states and has nothing to do with conduct of elections. It amounts to dishonesty of the highest order for IEBCâ€™s Communications and Corporate Affairs Manager – Tabitha Mutemi – to use bloggers to wax lyrical about how â€œthe commonwealth member states appointed the IEBC chairman, Isaac Hassan to chair its Electoral Network Secretariat for the next two years and how in their own opinion, commonwealth delegates were convinced that IEBC, under the chairmanship of Hassan, conducted a free, fair, transparent and credible election in 2013â€. Nothing could be further from the truth.

Secondly and perhaps more importantly, Hassan is assuming ceremonial chairmanship of an organization that offers nothing glorious in terms of good governance. CEN have themselves been severely criticized by independent bodies who conducted global research on international election observation (IEO) and that which found that their actives add no credibility to conduct of national elections. This criticism which the Commonwealth (and its European Union observer mission counterpart) have failed to respond to, has focused on three main points: that IEO missions are partisan; that the information available to IEO missions is inaccurate or inconsistently analysed; and that IEO missions are unable to detect and deter electoral irregularities.

Sample this: When IEO missions condemned the 2000 and 2002 elections in Zimbabwe, the EU imposed sanctions on Zimbabwe, and the Commonwealth suspended Zimbabweâ€™s membership of the organization on the basis of human rights violations. When IEO missions condemned the 2001 elections in Zambia, the EU and the Commonwealth did nothing. This is the same Commonwealth that Hassan and IEBC are climbing upon on mountain tops to announce so heartily. Shameless double standards we call it.

As if that is not enough, the Commonwealth Observer group issued its final report on Kenyaâ€™s March 4 2013 election in which it declared that â€œthe elections were credible and met many key benchmarks for democratic elections!â€

The Commonwealth Observer group report was prematurely released even before the Supreme Court dismissed on technicality two credible petitions challenging President Uhuruâ€™s election. Those historic petitions left the supreme court, the observer missions and the IEBC with egg on their face since most of what was challenged in the petition have yet to be disproven. For example, no one has been able to explain why there were approximately 1.5 million more presidential votes than those of governors, senators, and members of the national assembly and IEBC has to date not accounted for those 1.5 million unused ballots which all have serial numbers. Here you have an observer group blind to the election had been marred by massive failures by the BVR kits, Pollbooks, tallying system and transmissions system.

The commonwealth observers saw nothing wrong with the fact that equipment failure notwithstanding, the CORD coalition had formally sent a complaint to IEBC and copying all accredited observer missions that its agents had been expelled from more than 270 polling stations mainly in Central Kenya, Upper eastern and Rift Valley. True to character, the IEBC did nothing and the Commonwealth and EU observer missions failed to cite this significant development in their much discredited reports.

What the IEBC must address, notwithstanding the Supreme Court expunged 983 pages of evidence detailing malpractices in more than 123 constituencies is; the existence of video evidence of collusion between IEBC, KenCall and TNA party; tallying showing that President Kenyatta fraudulently benefitted from more than 1.2 million votes (the difference between what was declared on form 34 and 36) while more than 700,000 votes were deducted from Odinga’s votes. Recently, Jicho Pevu went further and broadcast to the world the existence of an unknown fibre cable from Bomas Presidential Tallying Centre directly to NSIâ€™s Headquarters in Ruaraka, Nairobi.

In a nutshell, IEBC Chairm Hassan is occupying nothing more than a ceremonial seat as a rotational chair of CEN and this has nothing with credibility of IEBC as an institution. Even the late Kivuitu as Chair of the disgraced ECK, would still have been Chair had the biennial Commonwealth Electoral Network (CEN) taken place during his time.

The lingering questions which IEBC has failed to address and are hiding behind security of tenure are still on the presidential petition of 2013. The fact that Hassan chairs an organization which is related to observer missions that have long outlived their usefulness in deterring election rigging does not sanitize the sham elections of 2013. Nothing short of a complete reconstitution of the IEBC and amendment to electoral laws will restore credibility of the electoral process in Kenya.