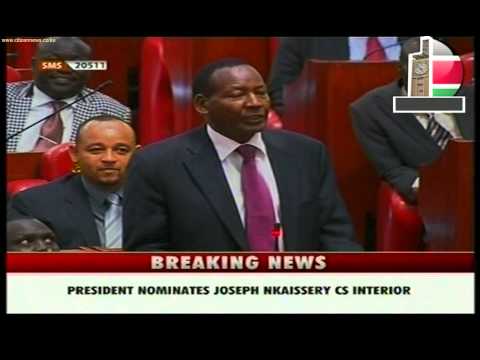 The Kajiado Central Member of National Assembly by-election will be held on Monday, 16th March 2015. Political Party Primaries to be completed by 29th January. â€ª#â€ŽIEBCâ€¬

Maj-Gen (Rtd) Nkaissery was elected as Kajiado Central MP on an ODM ticket in the 2013 General Elections.

It will take great organizational and mobilization skills by ODM to retain the seat.

President Uhuru is expected to name sacked Joseph Ole Lenku minister for Tourism or appoint him to an equally respectable state position as part of the carrot dangling to the Masai community to rally behind TNA candidate.

It is unlikely that Gen Nkessery will offer his support to his party ODM in the upcoming campaigns.

In a statement released on Tuesday, December 30, 2014, IEBCâ€™s Communications and Corporate Affairs Manager Tabitha Mutemi said those wishing to vie for the seat as independent candidates should submit their symbols and seek clearance from the Registrar of Political Parties by January 26, 2015.

At the same time, political parties wishing to participate in the elections must finalise their nominations and determine intra-party disputes arising from party nominations by January 29, 2015.