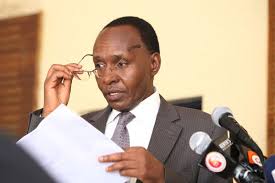 Prosecution witness OTP0189 took to the stand today to continue with giving evidence in which shocking revelations about the ‘accusers’ of William Ruto were made.

During the cross-examination by Ruto’s lawyer Syamala Alagendra, the witness said thatÂ  she had heard that top state officials wanted to blame Ruto for the violence despite ground intelligence showing that he had NOTHING to do with it.

The witness, only identified as P0189, confirmed the defence observations to the judges revealing that Ruto was to be blamed by the then PNU officials for the events that transpired in the North Rift during the 2007-8 bloodshed.

â€œDid you hear that the aim of some PNU officials and some government officials was to blame Mr Ruto for the violence before the Waki Commission?â€ asked Alagendra.

â€œAnd they wanted to blame Mr Ruto regardless of the truth. Iâ€™m right, arenâ€™t I?â€ asked the lawyer.

â€œAnd what they wanted was to say that William Ruto was responsible for that post election violence in North Rift Valley. Iâ€™m right, arenâ€™t I?â€Â  Alagendra continued.

Ruto ‘s lawyer Â further read out the names of eight individuals alleged to have been working for the PNU to gather evidence surrounding the post election violence which they are said to have presented to the Waki Commission.

The witness however denied knowledge that these specific individuals had been collecting such information for the Waki Commission.

â€œAre you aware that there was a group of individuals comprising, Stephen Tarus, Martha Karua, Mutea Iringo, Nancy Gitau, Stephen Mugwira, Abraham Limo, William Rono and Bethuel Ruto that were working together to identify witnesses and collect information to present to the Waki Commission?â€ asked Alagendra.

She had earlier told the court that she knew who some of those individuals were and the various roles they played for PNU.

At this time in 2008 Karua was the Minister of Justice while Iringo was an Under Secretary for Internal Security. Gitau was the Director of Political Affairs in the Office of the President.

The witness said that she knew who Karua was but did not know who Iringo and Gitau were.

She however confirmed that she knew Limo, Rono, Ruto (Bethuel) and Tarus.

The witness at the same time told the court that she was not aware that Iringo and Gitau placed any witnesses on witness protection and provided their upkeep as stated by Alagendra.