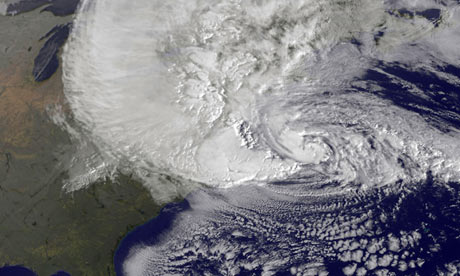 Hurricane Sandy, the storm bearing down on the US east coast, strengthened on Monday after hundreds of thousands moved to higher ground, public transport shut down and the US stock market suffered its first weather-related closure in 27 years.

Tens of millions of people have braced themselves for the arrival of the hurricane as the US National Hurricane Centre (NHC) said the Category 1 storm had strengthened as it turned towards the coast and was moving at 20mph. It was expected to bring a “life-threatening storm surge”, coastal hurricane winds and heavy snow in the Appalachian Mountains, the NHC said. Nine US states have declared states of emergency.

The hurricane, which has claimed 65 lives in the Caribbean, is also likely to play havoc with the US election, introducing a fresh element of uncertainty and disruption in the final days of the closely contested campaign.

Forecasting services indicated the centre of the storm would strike the New Jersey shore near Atlantic City on Monday night. While Sandy does not pack the punch of hurricane Katrina, which devastated New Orleans in 2005, it could become more potent as it approaches the US coast.

New York, Philadelphia, Washington, Baltimore and Boston all lie in the target zone, but Sandy is likely to cause disruption across much of the US and officials warned it could cause power cuts lasting for days. “The time for preparing and talking is about over,” warned Craig Fugate, federal emergency management administrator. “People need to be acting now.”

Barack Obama and Mitt Romney have both been forced to cancel events scheduled for Sunday and Monday, and the Obama campaign’s “early vote” strategy is in danger of being thrown into disarray. Instead, the president had more pressing matters at hand, as he signed emergency declarations for the states of New York, Massachusetts and the District of Columbia.

New York’s mayor, Michael Bloomberg, ordered the evacuation of some 375,000 people from low-lying areas and public schools were told to close on Monday. For only the second time in the city’s history, the subway system is to be closed. “If you don’t evacuate, you are not only endangering your life, you are also endangering the lives of the first responders who are going in to rescue you,” Bloomberg said. “This is a serious and dangerous storm.”

Although similar warnings of serious damage in New York last year turned out to be empty, people are taking few chances. Supermarkets were packed as customers stocked up, businesses closed early and nursing homes were being evacuated.

Airlines cancelled more than 5,000 flights and Amtrak began suspending passenger train services across the north-east. Philadelphia also shut down its subways, buses and commuter trains and announced that schools would be closed on Monday. Boston, Washington and Baltimore also called off school.

The US stock markets closed on Monday, and will possibly close on Tuesday, with regulators saying the storm would make it difficult to ensure the safety of employees.

Forecasters warned that at high tide, seawater could surge up to 3.4 metres above ground level in New York harbour. Obama urged those in the path of the storm “to take this very seriously” but expressed confidence that all emergency measures were in place.

“This hasn’t hit landfall yet,” he said. “So we don’t yet know where it’s going to hit, where we’re going to see the biggest impacts and that’s exactly why it’s so important for us to respond big and respond fast as local information starts coming in.”

The storm posed an additional challenge for Obama, who must balance his duties as president with his desire to get out on the campaign trail. After the US ambassador to Libya was killed in September, Obama was accused of quitting Washington too soon to attend a fundraising event in Las Vegas.

After visiting the federal emergency monitoring agency, he headed to Florida a day earlier than planned to squeeze in campaign stops there and in Ohio before returning to Washington.

Romney also abandoned campaign stops on the east coast but without presidential commitments he has been able to rearrange his schedule to continue campaigning elsewhere, chiefly Ohio.

Obama’s main campaign adviser, David Axelrod, told CNN no one knew how hurricane Sandy would affect the election. “We’re most concerned about people. This storm could affect 50 million people,” Axelrod said. “The best thing we can do is to focus on how we can help people, and hope it all clears out by next weekend.”

In New York, the aisles of Whole Foods Market in Tribeca, one of the biggest retailers in Lower Manhattan, were heaving with customers. Grace Lin, who lives just outside the evacuation zone, said she was taking in friends from nearby. “There will be four adults and four children, and we are two adults and two children, so it’s going to be pretty cosy,” she said.

Residents of the area had made similar preparations for hurricane Irene in September last year which ended up sparing New York City and leading to accusations of overreaction. But Lin said this storm appeared to be worse, and that she had particular concerns about power outages. “People are taking it more seriously than last time. The biggest issue for our friends is the elevators not working, not the flooding.”

Not everyone planned to leave the recommended evacuation areas, though. Kevin Heeney, 28, was stocking up with bottled water, but had no plans to move out. “We’re going to stick it out,” he said.

Emerging from Whole Foods laden with bags of groceries, Danny and Laura Fletcher, a British couple who had just moved to the city, were sceptical of the reaction of New Yorkers. “We’ve just bought a big roast lunch,” said Danny Fletcher. “I don’t think it’s going to be that bad. But it’s panic stations in there,” he said. Jonas Clark of Manchester Township, New Jersey â€“ in the area where Sandy was projected to come ashore â€“ stood outside a convenience store, calmly sipping a coffee and wondering why people were working themselves “into a tizzy”.

“I’ve seen a lot of major storms in my time, and there’s nothing you can do but take reasonable precautions and ride out things the best you can,” said Clark, 73. “Nature’s going to do what it’s going to do. It’s great that there’s so much information out there about what you can do to protect yourself and your home, but it all boils down to ‘use your common sense’