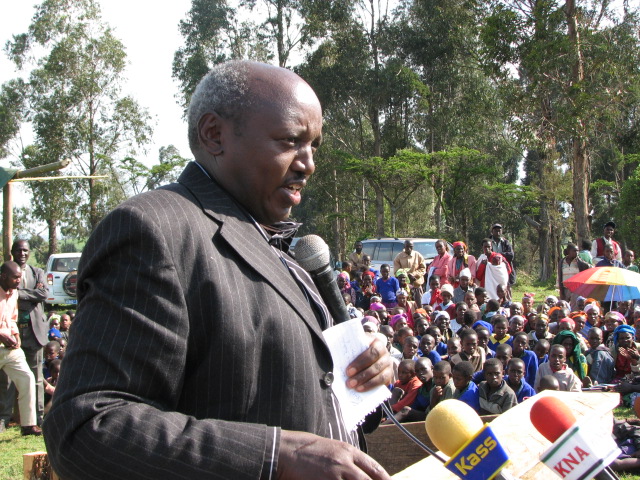 EYE OPENER MEETING WITH HON ZAKAYO CHERUIYOT.
By Arap Cheboin
The evening sky was pregnant with rain. The dark, thick clouds hang low over the sky of Kuresoi South, making the sun shy away into the horizon. This was one of those foul weather that intruded into an otherwise great Saturday evening.

I alighted from my friend’s car at the gate to Hon Zachayo Cheruiyot’s home. A chilly blast of air hit my body with a ferocity that sends shivers through me. I pushed open the gate and entered while dialing Hon Zk’s number. He picked at the first tone.

“Umefika? Somebody is coming to meet you at the gate.”

Ahead of me I could see a towering bungalow in the midst of indigenous trees. There was a small crowd of old men taking shelter from the drizzling rain under a tree in front of the house. The owner of the vast compound is undoublty a lover of trees, I thought. The compound is surrounded by a forest of trees.

“Weee. Wewe n Kennedy?” a voice inside the trees asked. I spanned round in time to see two men emerged between trees to my right. Peering through the trees behind them, I could see a building. This, I guessed, was where they were coming from. I replied in affirmative.

“This way please.” And to his companion whom I guessed was a gateman, he said “Usiende mbali na gate just in case bado kuna wageni wengine watakuja. Kaa karibu hili uwalete.”

We covered the distance to the main house getting to know each other with the man and I learnt is called *Kiplangat.

I waved my greetings to the wazee under the tree as we passed them. “They have come here to seek audience with Mheshimiwa,” *Kiplang’at explained to me.

“But I want you to go and meet Mheshimiwa there.”
I could see Hon Zakayo chatting with two other men under a building still being constructed. He saw me and moved few steps to meet me.

“Yes Arap Cheboin. Karibu sana!” That was Hon Zakayo. At that moment I was swimming in the sea of gratification having been wishing for so long to meet this Kipsigis leader who shakes to the roots his political adversaries with his oratories laced with wise sayings.

We chatted like old pals for about 10 mins and it was not long before we nose dived into politics. He enumerated many projects for the people of Kuresoi South, that are still going on and those he is planning to implement.

“On my way here, nilipitia Kirandich to inspect a road under construction,” he told me pointing to his vehicle that was covered with mud.

“There are various schools that I am launching this and next month! The Molo- Olenguruone road is just a matter of ‘tendering.’ Money has already been allocated”

A LAZY MAN WAITS UNTIL SUNSET TO GET BUSY.

“Insecurity is already becoming a blot on this government and needs to be addressed by UHURUTO like yesterday,” He said.

“When we try to question Uhuruto’s commitments towards fulfilling their promises to the people, we are branded troublemakers. Now, how can I be a troublemaker yet I am doing my work as a Member of Parliament? They [UHURUTO] said for instance that in 100 days, class one pupils will be having laptops. It is now about 500 days later, no laptops in sight. As Mp, I am to ask them what is going on? Are they waiting till the eleventh hour so as to get busy?”

MY TAKE: I won’t comment on my political feelings, after listening to Hon Zakayo but I must admit that there is great wisdom in his sentiments and stand on advocating for Kipsigis (and Kalenjin) place in politics and economy. I look forward to having another chat with him soon!