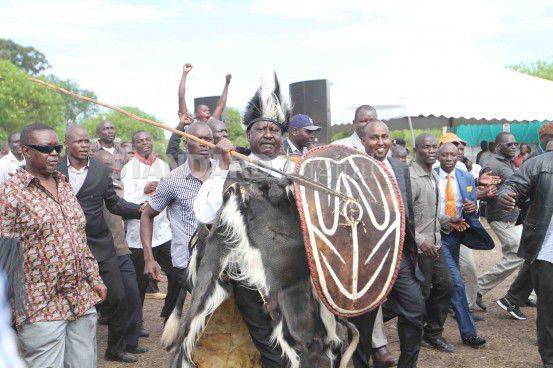 Leaders on Friday eulogised late Homa Bay Senator Otieno Kajwang as candid, fearless and generous leaders who fought for the expansion of democratic space in Kenya Cord leaders Raila Odinga, Kalonzo Musyoka, and Moses Wetangula said the late Senator was at the forefront in fighting for rights of people he led both in Parliament and Senate.

â€œI knew Kajwang when he was a student at the University, he was candid, fearless, generous and full of humour,â€ said Raila Odinga. â€œWe have lost a true leader who was loyal to the party,â€ he said. Kalonzo Musyoka said Kajwang will be remembered for what he stood for and despite his death the struggle will continue.

Kalonzo challenged the government to take action on security matters and re-asses Kenya Defence Forces presence in Somalia. â€œThe late Senator was concerned about state of insecurity in our country and this is what we want the Jubilee government to look into and restore situation back to normal,â€ he said. The leaders took the opportunity to parade new ODM party line up urging followers to accept the new line up as away forward in ODM leadrship
The late Senator was laid to rest in Mbita at a burial ceremony attended by leaders from different parts of the country.