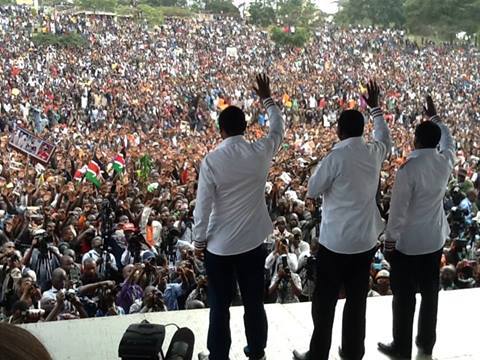 Never before has the country witnessed such a crowd, a million Kenyans assembled at Uhuru Park to DIALOGUE what ails the country!

Despite intimidating number of armed policemen, GSU and NYS wanainchi made sure the rally was a success.

Here below are the key resolutions that passed by the 1 Million Kenyans assembled at Uhuru park.

RESOLUTION BY THE PEOPLE OF KENYA DURING THE SABA SABA ASSEMBLY HELD ON MONDAY 7TH JULY, 2014 AT UHURU PARK, NAIROBI

WE THE PEOPLE OF KENYA here assembled at Uhuru Park on this historic day on which we commemorate our struggle for freedom, democracy and good governance;
REMINDED of the events of the 1960s leading to the clawing of the democratic ideals in the Lancaster Constitution by the administration of the late Jomo Kenyatta and noting that the Jubilee regime has adopted a similar pattern in reversing the democratic gains in our new Constitution by curtailing media freedom through the enactment of the Media Act, Amending the National Police Service Act and the National Police Service Commission Act, introducing amendments to the land laws to remove powers from the National Land Commission to the executive, amending the Truth Justice & Reconciliation Commission Act to allow Parliament to debate, amend and mutilate the Commissionâ€™s Report on historical injustices; and, introducing legislation to curtail the Civil Society movement in the country.
RECOGNISING that Article 1 of the Constitution of Kenya vests all sovereign power in the people of Kenya;
ALARMED by the direction that our country is taking; in particular, the rising insecurity, escalating cost of living and increased negative ethnicity and exclusion from public service and national resources;
CONCERNED about the refusal by the Jubilee regime to accede to National Dialogue with the
CORD Coalition to discuss issues of national concern to the people of Kenya;
CONCERNED by endemic corruption rife within Jubilee Administration, including complicity by senior officials in Jubilee Administration including: Anglo-leasing, Standard Gauge Railway, School Laptop project, Security surveillance equipment procurement fiasco;
CONCERNED that the Independent Electoral and Boundaries Commission has failed to take responsibility for their failure to duly discharge their mandate of managing an independent, impartial electoral process, with the open connivance and protection of the Jubilee Administration;
DISTURBED by the Jubilee Governmentâ€™s relentless assault on our Constitution; in particular, the curtailing of our fundamental rights and freedoms including the freedom of belief, expression and assembly; freedom of the media and press; undermining devolution by establishing parallel structures of Provincial Administration in competition with County Governments; and, flagrant failure to uphold the national values and principles of patriotism, equity and inclusivity;
AWARE that Devolution is the greatest gift in the new Constitution to the people of Kenya to promote equitable sharing of national resources and therefore deserves to be jealously guarded;
CONCERNED about systemic profiling and victimizing of sections the country based on religion and ethnicity by the Jubilee regime, leading to capital flight by for example the Eastleigh Somali business community to neighboring countries;
DISMAYED by the emasculation and abuse of Parliament by the Jubilee administration by subverting and undermining its legislative authority and mandate;
NOTING that this has already led to the assault on and reversal of democratic gains brought by the Constitution by enacting retrogressive and unconstitutional legislation;
DETERMINED to defend our hard-earned Constitution and to continue undeterred our pursuit of democracy, good governance, unity, peace, equality, inclusivity, justice and prosperity;
THEREFORE ASSERTING our sovereignty as the people of Kenya and our right to exercise the sovereign power directly; the Jubilee administration having refused to accede to our plea for national dialogue;
WE NOW RESOLVE as follows: –
1. We launch today OKOA KENYA, a peopleâ€™s movement to defend our Constitution, support one another in good and bad times, protect the gains we have made in democratic governance, and rededicate ourselves to national unity and peaceful co-existence.
2. Demand that the Jubilee administration addresses the escalating cost of living by reviewing the taxation regime; failing which we will boycott the consumption of goods and services whose prices are beyond the reach of the common Mwananchi and commence commercial sanctions against companies which continue to ignore our plight.
3. Convene an all-inclusive National Referendum Committee (NRC) for the purpose of preparing the people of Kenya for a national referendum on the critical challenges facing our Nation.
4. Mandate the National Referendum Committee to ensure the maximum participation of the people of Kenya in the referendum at the County, Sub-County and Ward levels all over Kenya; in formulating the referendum question(s), collecting and collating one million signatures to initiate the referendum.
5. Having lost all confidence in the Independent Electoral and Boundaries Commission (IEBC); do now demand its immediate disbandment and the establishment of a new electoral body.
6. Demand the immediate end to corruption, wasteful spending, reckless borrowing within and by Jubilee Government. In this regard, we demand that the Jubilee administration immediately cancels the inflated security camera contract irregularly awarded to Safaricom and that Safaricom withdraws from the contracts and subjects itself to competitive bidding, failing which we will commence commercial sanctions on Safaricom and other companies abetting corruption or engaging in monopolistic practices.
7. Demand that the Jubilee administration takes immediate steps to withdraw our gallant soldiers from Somalia to join our forces in securing our nation from home.
8. Demand that the Jubilee administration takes visible, decisive action to deal with runaway insecurity, including holding the senior security officials accountable for hundreds of Kenyans who have been killed and maimed in the various attacks and conflicts across the country.
9. Reject attempts by the Executive through Parliament to bastardise the Report of the Truth Justice and Reconciliation Commission (TJRC Report) and demand the immediate implementation of the original and unadulterated Report.
10. Demand that the Jubilee administration immediately addresses the underlying land issues that are at the heart of some of the most enduring historical injustices and conflicts in our society.
11. Demand a National Audit and publication by the Public Service Commission of all appointments made in the public service by the Jubilee administration, with full details listing names, ethnic backgrounds and percentages.
12. Recognizing that the Jubilee administration has failed to apply national resources equitably across the country, we demand that 40 per centum of the projected ordinary revenue of the current fiscal year be allocated to the County Governments.
13. Demand that a National Audit on how resources at the disposal of the National Jubilee administration are applied across the country.