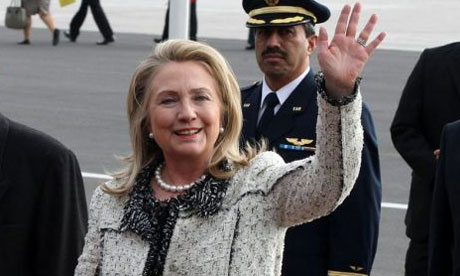 Hillary Clinton arrives in Peru where she said any failings regarding the security of the US embassy in Libya were her responsibility. Photograph: AFP/Andina/Getty

On eve of second presidential debate, secretary of state is seen as trying to deflect criticism of Barack Obama

Hillary Clinton has taken responsibility for the deadly security breach at the US diplomatic mission in Benghazi, saying the buck stopped with her and not the White House.

The secretary of state took the blame in an interview to CNN on Monday night in what will be seen as an attempt to deflect Republican attacks on Barack Obama over the affair on the eve of the second presidential debate.

“I take responsibility,” she said in Lima, Peru, in her first interview about the 11 September attack that killed the US ambassador to Libya, Chris Stevens, and three other Americans.

“I’m in charge of the state department’s 60,000-plus people all over the world [at] 275 posts. The president and the vice-president wouldn’t be knowledgeable about specific decisions that are made by security professionals [who are] the ones who weigh all of the threats and the risks and the needs and make a considered decision.”

Mitt Romney’s campaign has hammered the administration over the security breach and its different explanations of how it happened. Romney is expected to continue the line of attack in Tuesday’s debate.

The issue gained traction during last week’s vice-presidential debate when Joe Biden said the White House had been unaware of requests to bolster security at the consulate. That appeared to contradict testimony from state department officials who said requests had been made and rejected.

A diplomatic cable presented to a congressional oversight and government reform committee tasked with investigating the affair showed that Stevens asked the state department for an additional 11 security personnel weeks before the attack. Republicans have demanded the administration reveal who knew what and when, saying there was a lack of transparency and that the attack showed the failure of Obama’s Middle East foreign policy.

On Sunday David Axelrod, a key member of the president’s inner circle, said Romney was “working hard to exploit the issue” for political gain.

Clinton’s remarks on Monday tried to draw the fire by saying neither Obama nor Biden was involved in the decision. “I want to avoid some kind of political gotcha,” she said, shortly after arriving in Lima for a conference on women and entrepreneurship.

Commentators said it was an attempt to shield the president. “This was a purely political move to give Obama breathing room tomorrow night. That’s it,” said therightscoop.com.

The secretary of state rebuffed criticism that administration officials continued to depict the attack as a spontaneous backlash against an anti-Islam film even after evidence emerged showing it was planned beforehand by a radical, well-armed group.

In the immediate aftermath of such events there was always “confusion” and “fog of war”, Clinton said. She described an “intense, long ordeal” for staffers at the state department on the night of the attack as they struggled to find out what was happening and respond.

Clinton said her mission now was to make sure such an attack never happened again but that diplomacy, even in perilous parts of the Arab world, must continue. “We can’t not engage,” she said. “We cannot retreat.”