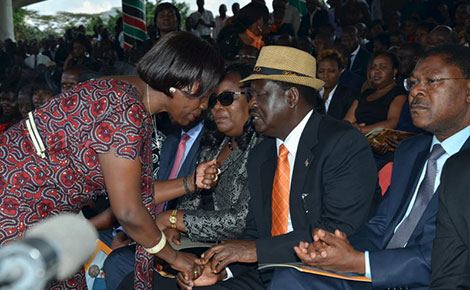 By Geoffrey Mosoku for the Standard

Nairobi, Kenya: Mourners flocked Uhuru Park in Nairobi to bid farewell to the late Homa Bay Senator Otieno Kajwang’, who was eulogised as a fearless and selfless fighter for the less privileged in the society.

The crowd went into a frenzy as a hearse carrying Kajwang’s casket, which was draped in the Orange Democratic Movement’s flag, drove into the park, from the Nairobi Central SDA church where his funeral service had concluded.

Speakers were drowned by loud screams and whistles from the mourners, some who waved twigs while others surged forward menacingly, giving pallbearers a hectic time trying to keep a cordon around the casket.

The leaders had a difficult time controlling the public who kept shouting them down. At some point even Ruaraka MP and the late Senator’s brother, T J Kajwang’, was forced to cut his eulogy short.

A planned public viewing of the body was called off at the last minute following the huge turnout of mourners. Lack of adequate security is also said to have forced the event organisers to hurriedly drive the coffin out of the park.

The Gor Mahia football team, which the senator supported, were among those who came to pay their last respects. Muturi and Senator Kimani Wamatangi (Kiambu)seemed not to have appealed to the crowd, forcing the latter to cut his speech short.

When it came to Muturiâ€™s turn, Raila prevailed upon the mourners to allow him condole the family and bid farewell to a close friend he had cherished. “I am celebrating the life of a hero. We are celebrating the life and times of a courageous Kenyan, it is indeed, a sad day,” said Muturi. Ethuro said: “The Senate has lost a crucial debater. He stood for devolution. He is somebody who stood for something of great interest to this country. The Senate will really miss his contributions.â€

Raila broke into a popular Luo traditional dirge to express his loss, working up the crowds and moving some to tears. In Dholuo he chanted, “Gimi chamo ema ikwano, gima odong chien ok Mari,” loosely translated to “what you have eaten is yours, what you have left behind is not yours”. The ODM party leader said:

“It is with a very heavy heart that I pay tribute to the fallen fearless, selfless, polite, gentleman, friendly and loving person, who went out of his way to please others.” â€œWe have lost a vital asset in our party, coalition and the entire nation. He fought for the less privileged without charging any legal fees.
He has died not rich but fulfilled,â€ said Raila. He continued:

“Kajwang’ wanted a new Kenya, recognising the role of the youth and women. He wanted to see Kenya rebuilt afresh, free of corruption.â€ The former premier condemned the Government for spiraling insecurity, recounting parts of the country that had borne the brunt of terror attacks, as the crowds recited one of Kajwang’s famous calls.

“Ukiruka huku bomb, ukiruka kule bomb, kila mahali bomb (Everywhere you go there are attacks),” Raila said. “Those charged with the responsibility of ensuring the security of Kenyans should step aside if they are unable to guarantee it.”

Raila recalled his friendship with Kajwang’, which dated back to the early 70s when he was expelled from the University of Nairobi for championing students’ rights. â€œThe late Jaramogi Oginga Odinga assisted him to continue with his studies at Makerere University but this did not deter him from advancing his ideologies to liberate Kenyans.

Kajwang’ talked passionately about the countryâ€™s security until his unfortunate demise.” â€œKajwang’ is dead but his spirit lives on. The struggle must continue, aluta continua,â€ stressed Raila. Wetang’ula said Kajwangâ€™s death has snatched from the country a true leader.

Kajwangâ€™s father urged the public to remain peaceful as his son was a peaceful person. â€œLets continue to be peaceful. This is what my son fought for and in his honour going forward, we need to preach peace,â€ he urged.

Karua, who was Kajwangâ€™s college mate said he was a sharp student and fought for minority rights. â€œThe death of Kajwang’ is a big loss. We will continue to pursue what he stood for,” she said. Orengo asked the Government to conclude any cases against Kajwangâ€™. Earlier, the senator, who was a member of the SDA church where he served as a Sabbath school superintendent and choir member in the 1980s and 90s, was eulogised as a charming man, who always sought to entertain those close to him.

Political rivals from the Jubilee alliance and the Coalition for Reforms and Democracy put their differences aside to give their colleague a good send-off. Senate colleagues, National Assembly members, governors, Opposition and other leaders including Musalia Mudavadi attended the emotional service

During the service, his wife Rose moved the congregation to tears and at times laughter as she narrated how she met the Kajwang’ in the mid-1980s on a bus. Kajwang’s wife said their relationship began after he offered to buy her a new hair pin to replace her broken one. “I had a ponytail hairdo, which Jerry said looked nice and when we were parting ways, the hair pin broke and he picked the broken pieces. He asked to meet me again to replace the pin,” she recounted.