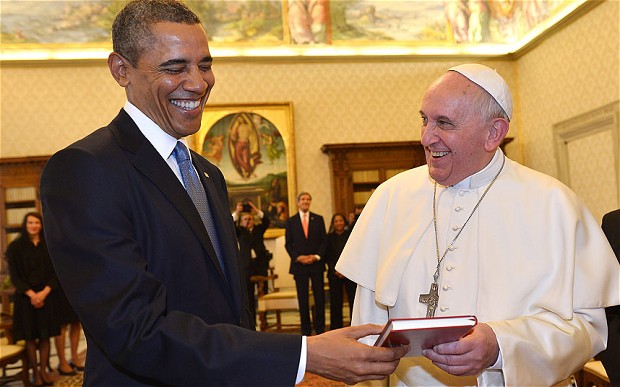 The private meeting between President Barack Obama and Pope Francis had been scheduled to run for half-an-hour. It lasted 52 minutes. The president had been escorted into the Vatican by a line of Swiss guards, dressed in purple and yellow, wearing helmets and carrying pole arms. The cameras clicked as the president and the Pontiff shook hands, and then they sat at a small wooden table in the Papal Library, exchanging greetings through translators. â€œItâ€™s wonderful to be here,â€ Obama said. â€œIâ€™m a great admirer. Thank you so much for receiving me.â€ Francis answered: â€œThank you.â€

The rest of their meeting took place behind closed doors. The Obama administration had billed the meeting, the first between the two leaders, as an opportunity to share common ground over the gap between the rich and the poor. â€œThe Holy Father has inspired people all over the world, including me, with his commitment to social just and his message of love and compassion, especially for poorest and most vulnerable among us,â€ Obama said the day before in an interview with the Italian newspaper Corriere della Sera. â€œWhen the Pope speaks, his words have an enormous weight.â€

But the two men are likely to have touched on subjects on which they disagreed. Vatican officials have said that Francis would bring up the concern of the U.S. Conference of Catholic Bishops over the requirement that birth control be covered under the new health care reform law. And on Thursday, Francis met briefly with a group of immigration activists, who asked him to raise the issue of deportations in the United States. According to Jersey Vargas, a 10-year-old elementary school student from Los Angeles whose father is facing deportation, the Pope promised he would raise the issue when the two men met. â€œI told him to pray for my family and to ask the president to stop deportation because itâ€™s separating my family,â€ Vargas told Fox News Latino. â€œHe blessed me and told me he would bring this up with President Obama.â€

At the end of the visit, the two men emerged to pose for pictures and exchange gifts. Obama gave the pope a wooden box made of reclaimed wood from one of the oldest Cathedrals in America, containing fruit and vegetable seeds from the White House Garden. â€œIf you have the chance to come to the White house, youâ€™ll also see our garden,â€ said Obama. â€œOf course,â€ answered the pope. The Pope, in return gave Obama a copy of the encyclical he published in June. â€œI actually will probably read this at the Oval Office when Iâ€™m deeply frustrated,â€ Obama said, eliciting a chuckle from the pontiff. â€œIâ€™m sure it will give me strength and calm me down.â€

Rome was in a state of partial lockdown during Obamaâ€™s visit, with traffic diverted in many parts of the city center to make way for Obamaâ€™s Chevrolet SUV and his 50-car motorcade. The broad boulevard leading from the edge of the Tiber River to St. Peterâ€™s Square and the Vatican was cleared of cars. On the other side of town, yellow police tape lined the long lane that runs between Romeâ€™s ancient forums to the Coliseum, where Obama was expected to tour in the afternoon.

After his visit with the Pope, Obama was expected to meet with the Vatican Secretary of State Pietro Parolin, followed by a â€œworking lunch,â€ with Italyâ€™s President, Giorgio Napolitano, and a meeting and a news conference with the countryâ€™s recently elected Prime Minister, Matteo Renzi. After his tour of the Coliseum, he was scheduled to meet with embassy staff and their families.