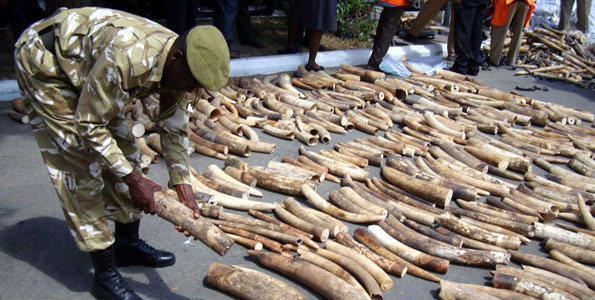 Two security officials colluded to smuggle ivory worth millions of shillings from State House, Mombasa, in one of the most intriguing theft cases involving government employees. An investigation into the mysterious disappearance of the ivory has found that the plan to steal the prized items from one of the most heavily guarded premises in the coastal city was hatched over a long period.

The April incident saw a General Service Unit constable and a caretaker sacked after investigators concluded they had masterminded the theft.

The sacked GSU officer told police investigators that the theft was hatched by the caretaker who brought him into the plan when he (caretaker) found it difficult to remove the ivory out of the highly-guarded compound without being detected.

The officer claimed he facilitated the deal to understand how the theft syndicate worked and arrest the caretaker and the buyer. But police did not buy this argument.

To nail the two, CID officers confiscated a mobile phone from the caretaker and found several short text messages he had sent to and received from a man believed to have facilitated the sale of the ivory. They disguised themselves as the caretaker and sent text messages to the broker promising a new deal. They also wanted to find out if there were buyers ready to purchase more ivory.

â€œBut unfortunately the broker realised there was a difference in tone between previous messages and the new ones being sent by detectives and disappeared,â€ a police source said. The man also discarded the phone and the line.

A senior GSU officer charged with securing State Houses and Lodges across the country told the Sunday Nation that more than five pieces of ivory were still missing. Some of the stolen ivory is believed to be part of the consignment seized at the port of Mombasa last week. District Criminal Investigations Officer in charge of the Port, Mr Mwera Mukuri, however, declined to confirm the reports.

â€œThe investigation is ongoing and I will not divulge details because it will be prejudicial,â€ said Mr Mukuri, adding that â€œwe are yet to establish the source but have obtained crucial leads.â€ Independent sources, however, confirmed that four pieces of ivory stolen from State House were among those seized.

â€œThe four pieces have unique features and look older compared with the rest of the haul,â€ said an officer. Another senior police officer, who is privy to the investigation, said the stolen ivory pieces included one weighing about 100 kilos that went missing from an office designated for the First Lady. â€œIt is the largest of them all and suspected to be the first one to have been taken out,â€ said the officer. Two smaller pieces that went missing from the Presidentâ€™s office were found hidden underground within the premises of the State House building.

SOURCE: Read more at the Nation