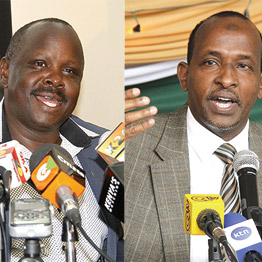 A spat between two leaders marred celebrations to mark the third Mara Day presided over by Deputy President William Ruto and attended by dignitaries from Kenya and Tanzania.

Rutto was physically prevented from confronting Duale having been infuriated by his dismissal of the calls for referendum telling Rutto â€˜hii pesa sio ya mama yakoâ€™ (this money does not belong to your mother).

â€œGovernor Rutto, you must appear before the senate for questioning about the Sh184 million. You can run all over the country calling for the referendum but you must account for the money you get from national government,â€ said Duale.

Rutto stood up pointing his finger at Duale but was prevailed upon by Tunai and Kassim to sit down.

Deputy President William Ruto apologized for the confrontation when he rose to speak.

â€œOur friends from Tanzania, we apologise for what has happened here. We are very peaceful people here in Kenya,â€ said the DP.

Ruto dismissed calls for the referendum by governors and Cord saying, â€œTheir agenda is not about the push for more money but politics aimed at destabilizing Jubileeâ€™s drive to implement itâ€™s manifesto.â€

â€œThey have a political agenda and they should just say that so that we can also roll up our sleeves and politick because we are also up to the task,â€ he added.

Ruto reminded the governors in apparent reference to the Bomet governor to stop lecturing the government on devolution.

â€œWe donâ€™t need lectures on what the constitution provides, we devolved county functions in one year instead of three. Some governors are constructing roads while others are busy making noise. We should call a spade a spade and not a big spoon and tell the people the truth,â€ said the DP.

He said governors should be sincere on their push for referendum and should stop making threats to the government.

In his speech, Rutto, who is also the chairman of the Governorâ€™s Council, vowed that they will not relent in their clamour for the Pesa Mashinani referendum.

â€œThe constitution is clear on equitable distribution of resources,” he said.

Of the incident, Rutto posted on his Twitter handle, “Narok today- wananchi were subjected to a concerning level of intolerance, insults and affront to their democratic right by National leaders.”