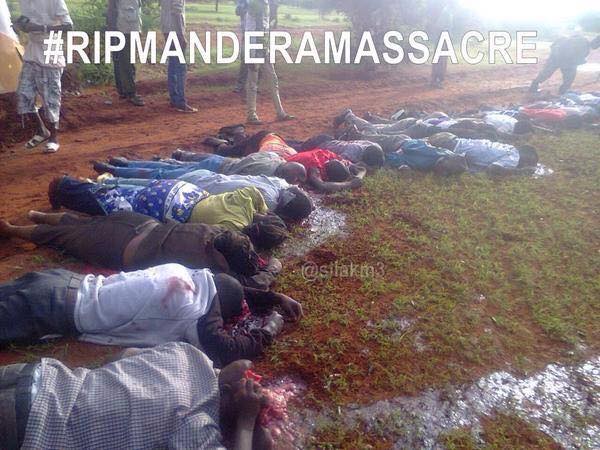 Mandera County Governor Ali Roba had shared intelligence of possible Al-Shabaab attack with government security authorities but it seems his concerns were dismissed.

Last week,Â a frustrated Mandera Governor Ali Roba went public on a community radio in Garissa and revealed the government is not taking the intelligence reports they were giving out seriously

“We have strong intelligence which we have shared with security authorities, but we are disappointed that the authorities are not taking us seriously,” Mandera County Governor Ali Roba told SabahiÂ Radio.

“The information we have is that al-Shabaab terror cells in Somalia will be crossing into Kenya and will liaise with their partners in Mandera to carry out attacks in Kenya,” Roba said, adding that the militants’ ultimate target is Nairobi.

Mandera has become a base for al-Shabaab militants fleeing joint operations in Somalia by Somali National Army and African Union Mission in Somalia troops, he said.

“We are not mad to raise an alert of such serious nature,” he said. “We have credible information from citizens who care about the wellbeing of our country and it should not be ignored.”

“The tips we have from the residents are that al-Shabaab [militants] have infiltrated Mandera and some more are making their way into Kenya from Somalia in preparation to strike,” he said.

“I do not have to name the specific targets the militants are eyeing, but the same information is with the [police] and it is their duty to take the necessary measures to counter the plans.”

Mwivanda, however, denied that he received any such intelligence report from Roba.

“The governor has not come to me personally or even to any Mandera County police desk to report impending terror attacks in the country,” he told Sabahi.

“We have Occurrence Books at every police station in the county and there are no such reports from the governor [recorded] on possible terror attacks.”

Nonetheless, Mwivanda said police have received numerous reports directly from members of the public about al-Shabaab and reassured citizens that the authorities are acting on that information.

“We keep track of all forms of information we receive,” he said. “Al-Shabaab has managed to carry out covert activities, but we have equally managed to foil some of their plans.”

Mwivanda urged citizens to remain vigilant and to continue reporting any suspicious activity.

A string of attacks in Mandera

Mandera has suffered a series of attacks since January, with at least three explosions documented in October and two explosions this month as of November 18th.

“The worrying thing is that there have been no conclusive [police] investigations resulting in arrests and prosecution of the culprits,” Mandera County Senator Billow Kerrow told Sabahi. “The criminals are roaming free, planning their next targets. It is just a matter of time before the criminals cause a disaster in Mandera and the country.”

In one such attack, Roba’s convoy was targeted as it drove along Kenyatta Avenue on October 15th, hitting an improvised explosive device (IED) near the Rhamu bus stop.

Two days later, security forces safely detonated an improvised explosive device buried at the side of the road at the same location.

On October 30th, three civilians escaped without injuries when an IED detonated as their vehicle passed the same bus station on Kenyatta Avenue.

“Investigations have since established that it is the work of al-Shabaab sympathisers who were targeting a police vehicle that was in front of the vehicle,” Mandera County Deputy Commissioner Elvis Korir told Sabahi at the time.

In the same area on November 5th, a construction vehicle was damaged and its operator was injured in an explosion at a road construction site. A second blast followed an hour later as first responders were assessing the damage, however no injuries were reported.

Al-Shabaab could exploit squabbles among officials

“He made the statements in public forums and has not followed up the same with the proper protocol of reporting to the police,” Nkoyo told Sabahi. “If he issues the warning statements in public and he does not provide us with actionable intelligence, we can do nothing.”

Members of the public should feel confident about their security, said Nkoyo, who also chairs the Mandera County security and intelligence committee.

Kenyan police spokesperson Zipporah Mboroki also said she has not been briefed about the governor’s alert.

Al-Shabaab continues to pose a threat to Kenya and the authorities should not drop their guard by engaging in such squabbles, said security analyst and retired Kenyan army Colonel Daud Sheikh Ahmed.

“The group may have been dislodged from their strongholds in Somalia, but there are remnants who found their way into Kenya,” he told Sabahi. “Still reeling from the defeat in Somalia, militants may carry out major attacks when they are still fresh [in Kenya], just to make a point.”

County and national government leaders must work together and communicate better in order to successfully neutralise the threat of al-Shabaab, he said, adding that it would be tragic if Mandera County police failed to act on information they had been provided.