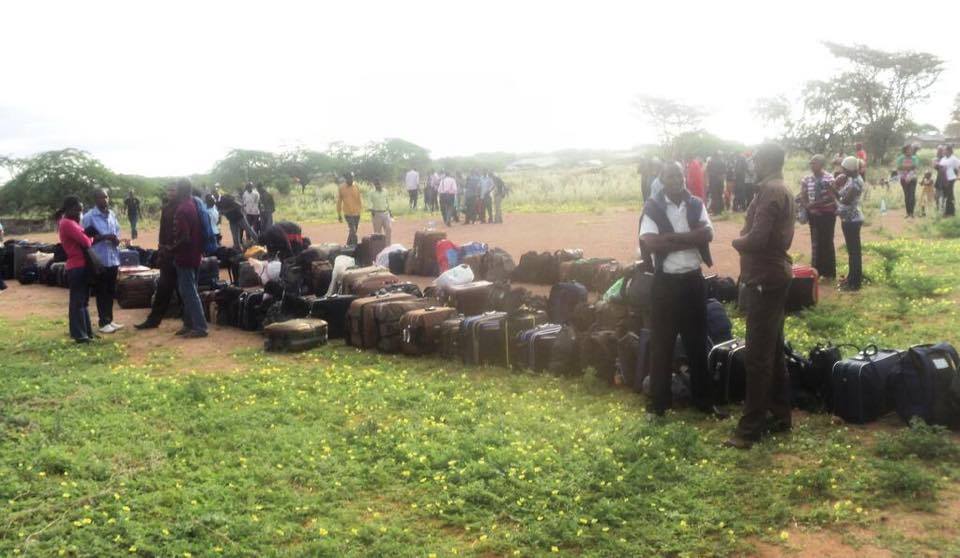 Top Government officials persuaded about 300 non-locals camped at the Kenya Defence Forces airstrip in Mandera not to flee the region. The group included teachers, health workers and artisans who fled to the security installation on Monday fearing for their lives after Al-Shabaab terrorists on Saturday massacred 28 non-muslims pulled out of a Nairobi-bound bus.

Women and children were among those who gathered at the airstrip carrying luggage and seeking to be evacuated. They spent the night at the facility where they were fed by soldiers. Head of Public Service Joseph Kinyua, Army Commander Lieutenant General Joseph Kasaon and Mandera Governor Ali Roba spoke to the group behind closed doors between 11am and 2pm yesterday.

The Government officials were reluctant to allow mass evacuation, saying it would send the wrong signal across the country and embolden terrorists. Representatives of the group told the officials that those camped at the airstrip had received threats. But the security officials promised to beef up security.

Those who still wanted to leave the area, especially teachers since schools are closed, were assured they would have armed escorts. State officials, however, pleaded with health workers not to leave. â€œTerrorists want to divide us along tribal and religious grounds. We shouldnâ€™t allow that to happen,â€ Mr Roba said.

The security team assured that more police officers would be deployed even in homes, and a security hotline was circulated. Meanwhile, the Evangelic Alliance of Kenyan Churches now wants the Government to review the competence of those in charge of security.

Kennedy Kimiywe of Christ is the Answer Ministries said Kenyans no longer enjoyed the constitutional right of free movement due to insecurity. â€œWe call on the Government to seriously look at the competence of the personnel tasked with security apparatus in the country. They must take full responsibility and we would want to see this particular docket streamlined so Kenyans can move freely in their own country,â€ Rev Kimiywe said.

Speaking in Nairobi, the church leaders raised concerns that whenever the Government was targeted, Christians were hardest hit. â€œWe would like to remind the Government that Christians seem to be the soft belly of the Governmentâ€™s fight against terror in the country.

Terror groups have been known to choreograph attacks on Christians as much as possible and this trend is becoming increasingly worrying,â€ said Geoffrey Njuguna of Deliverance Church. Rev Njuguna, however, urged Islamic leaders to show their support by condemning the killings. â€œThe attackers are trying to divide us but we stand united.

We would also like to hear more from our Islamic leaders on this issue,â€ he said. The alliance said illegal immigration from Somalia and other countries had gravely compromised internal security. â€œCorruption is slowly but surely weakening our security and there is a major fault line that must be addressed. We cannot enjoy the benefits of being Kenyan in our own country until the Government deals decisively with corruption and insecurity,â€ said Njuguna.