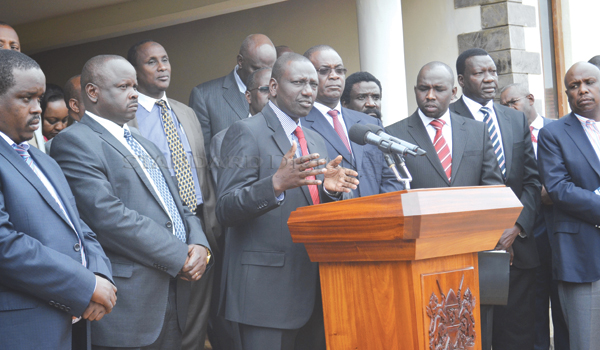 The powerful forces have lost their quest to retain huge chunks of cash meant for County governments, in this report filed by Standard Newspaper’s Geoffrey Mosoku, deputy president William Ruto is said to have conceded to the demands by governors and senators that funds should be devolved to the counties asap! Here is the report by the Standard:>
Governors won battle for devolution funds after national government ceded ground and withdrew a gazette notice that had retained money meant for roads.

Deputy President William Ruto on Monday directed that the notice published by Transitional Authority (TA) be withdrawn while concurring with the county chiefs that it was in bad faith.

Mr Ruto convened a stakeholdersâ€™ meeting and unlocked the stalemate that was threatening the smooth transfer of functions and subsequent allocation of funds to the devolved units.

In the meeting, governors expressed frustration that TA was making decisions without consulting them, with some of the decisions being unconstitutional.

The governorsâ€™ position was supported by Commission on the Implementation of the Constitution (CIC) and Commission on Revenue Allocation (CRA), which argued that the transfer of any function should be done as provided for both in Constitution and relevant laws.

After more than six hours of intense discussions, the Deputy President emerged from the meeting and announced that they had agreed on a road map that will facilitate smooth implementation of the Constitution especially on devolution.

Part of the agreement was the withdrawal of the Kenya Gazette notice that had retained Sh27 billion for county roads and publish a partial list of counties to take over devolved functions.

â€œThat gazette notice is withdrawn,â€ Ruto said, adding that TA had until Friday to gazette the functions devolved to all the 47 counties.

The TA was directed to transfer all the functions with counties confirming that they will put their applications by last evening.

â€œThe county governments have confirmed that they will comply with the applications by this evening while TA has undertaken that it will transfer all functions by Thursday and publish the gazette notice by Friday,â€ the Deputy President added.

The TA, once again, was asked to classify the road into the categories of national trunk roads and county roads while Kenya Urban Roads Authority (Kura) and Kenya Rural Roads Authority (Kerra) will be devolved immediately. The county governments committed to honour the contractual agreements on ongoing road projects with a committee being set to determine on how counties will share a bill on a road that traverses more than one county. The committee will also oversee the devolution of services undertaken by Kura, Kerra and Rural Electrification Authority.