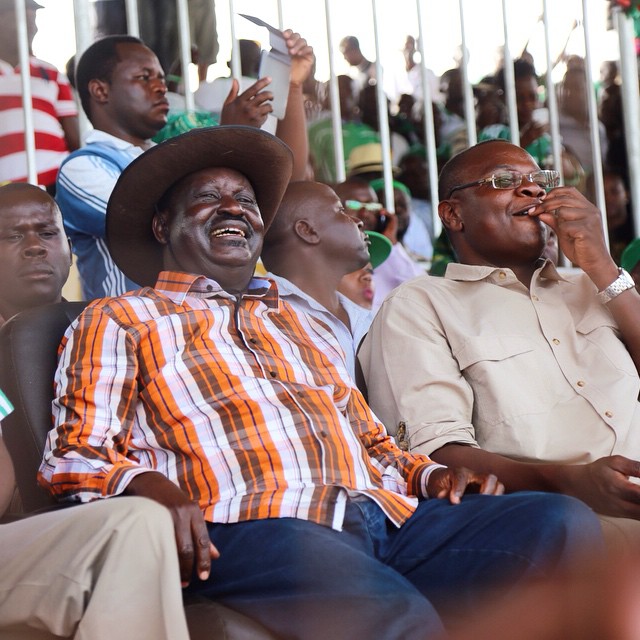 Former Prime Minister Raila Odinga accompanied by former Sports Minister Paul Otuoma and top Football Kenya Federation (FKF) were among the dignitaries who turned up to watch the match.

Goals from Eric Ochieng, Dan Sserunkuma and an own goal by Richard Mmboyi were enough to give Gor Mahia their second KPL title in a row and a chance to represent the country in next year’s champions league.

It was a historical moment for Gor Mahia as they broke a long standing jinx of not having won their last match of the season for the last five years. There were few chances for a large part of the first half with Gor Mahia enjoying the support of the thousands of fans took time to settle and their opponents eager not to break down.

The first chance for Gor Mahia came in the fifth minute when Dan Sserunkuma failed to tap home a Godfrey Walusimbi well taken free kick. Then Evans Kiwanuka threatened for the tax men after ten minutes but he could not put the ball into the net.

Gor Mahia then had another wonderful opportunity to get ahead in the 43rd minute but Dan Sserunkuma could not finish off a 1-2 move with George Odhiambo. However, the miss was laying the ground work for the opener and it did come ten minutes into injury time with Eric Ochieng opening the scores with a wonderful finish.

Gor Mahia continued to press in the second half and wee rewarded five minutes on resumption when Dan Sserunkuma latched onto a George Odhiambo pass to place it beyond Kennedy Otieno in the KRA goal. Despite conceding the second goal, KRA did not give up.

Carlson Mweresa gave way to Godfrey Kataka with the clocking hitting the one hour mark and the latter’s first move ended up in the Gor Mahia box but it was cleared by Israel Emuge. Then in the 61st minute Jerim Onyango had to be at his best to deny Evans Kiwanuka from scoring with a well taken free kick as the tax men earned their first corner of the second half.

Israel Emuge who is returning to the Gor Mahia backline after a long lay off from injury, should have put his name on the score sheet but was denied by Kennedy Otieno in the KRA goal.

Gor Mahia substitute Simon Mburu who had come on for Simon Pierre engineered the third goal as his goal bound shot was deflected into the net by Ushuru defender Richard Mmboyi in the 78th minute and it was enough to ensure Gor Mahia emerged champions.

After the final whistle, thousands of fans poured onto the pitch and delayed the trophy presentation ceremony. FKF chairman Sam Nyamweya congratulated Gor Mahia for emerging champions. “It was a tight race to the finish which made it an exciting season,” he said.