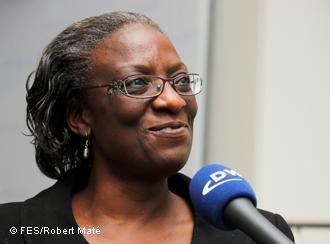 This has infuriated civil liberties activists and former colleagues of Ms Jaoko, who clearly see an ethnic angle to the AG’s ‘illegal’ obstinance to forward the name to the president for formal appointment, then vetting by parliament.

According to the President of East African Law Society James Mwamu, an advocate of the High Court of Kenya, AG’s move to re-advertise the job reeks of many things, impunity the very least.Â

Here is what Mwamu posted on his Facebook today;

“After doing the interviews three (sic) for the post of Chair of Kenya National Human Rights Commission , Jaoko Simbiri emerged as the top candidate three times. Now the AG in a bid to rob this great woman her Job has decided to re-advertise the post”

“This is act of bending the Law out-rightly smacks of impunity ,ethnic and gender discrimination.The AG must not be allowed to get away with this.Let the President forward the name of Jaoko to Parliament for vetting and save Kenyans these shenanigans” Mwamu added.

The tiff between AG and Ms Sambiri dates back to the time when the lady was the Chair of KNCHR, the precursor to this new Human Rights commission. Kenyans will recall that Ms Sambiri forcefully urged the AG to follow the law in a (then) widely publicised altercation between AG Githu and CIC Chair Charles Nyachae.

Nyachae had then accused Githu of frustrating the drafting of bills meant to anchor the new constitution. In a rejoinder, Githu warned Nyachae not to ‘supervise him’, claiming he was then only answerable to the president and then Prime Minister.

“I cannot be directed by a non independent, unconstitutional office whose mandate might as well end within two years”.

He continued, â€œI deny the claims in strongest terms and term them as unfortunate and inappropriate. They are at best mischievous and at worst irresponsible.â€

Jaoko urged the two to solve their issues within the purview of the Law. However, Jaoko’s commission, where the current Mombasa Senator Hassan Omar acted as a commissioner, has also been widely accused by the Jubilee Alliance for coaching witnesses for Uhuru’s case at the Hague.

This is where, according to this writer, Jaoko’s tribulations lie. She is seen as an enemy. She is also seen as someone who may not turn the other eye when human rights abuses may be committed in future.

With the current situation; and the expectation that the President may not honour the Hague, Jaoko’s appointment to head the Human Rights agency may not complete an equation.

Sources deft in the ‘dominant’ thinking within the Jubilee Alliance shared with this writer Â that the security organs, and voices, must conform to the dictates of the ruling power. Jaoko is not in that category.

The shifting realities of the Kenyan statecraft may not work best for Jaoko. Already, her ethnicity substantially reduces her ‘bonga points’; and, added to her history of ‘independent-minded’ and association, by virtue of work, with people accused of delivering Kamwana to Ocampo (currently Bensouda), the odds are egregiously against her!

These are the times when some people regret why he lost on March 4. Shriek!