If you are keen, you will notice I added ‘wo’ instead of Â ‘o’ in the newest Wikipedia entry from this part of the earth,’giniwasekawo’. I peeped on Philip Ochieng (yes, the very one) and was informed that only the ‘lakers’ should use the ‘o’ while the rest of us go with the ‘wo’.

I do not wish to get into the politics of why and why not. Instead, I accept my responsibility as an outsider and go with the crowd. I never wish to be a luo. Not even in the life after Jakom. My heart is so ‘small’ I will die of heart attack by the kind of communal injustices that come with sharing omena with my friend Otieno and Onyi. My only admiration is that the community (at least my agemates) have treated me fairly, insulted me wisely, and accepted me grudgingly.

I do tell them I am not the one who messed up the BVRs in 2013 and that I was neither in Naivasha in 2007. I come from Nyeri, yeeees, but I have never seen any of those barbaric husband batterers. I am ‘okuyu’ and just like Otieno has ‘no apologies’ to make, we all agreed I shouldn’t apologize either! Finally, I wait for the 5th coming of Raila Odinga where again I will vote ‘confidentially’ and wait for petitions!

Gor Mahia’s 18 year chase for the Premier league title is now forgone conclusion. With it, commentators and critics have attempted to present an image of the club’s fan base as ruefully violent and dangerous savages. Read how Bukulu put it on Daily Nation the other day:

It is like hitting our heads upon asphalt pavements! It is a thankless task but it still is our charge as the mouthpiece of Kenyan football to castigate in the strongest terms whatever goes on with the so-called â€˜Green Armyâ€™.

That horde went on the rampage again and the mayhem they caused is worse than any form of impunity that this country can stomach.

Just when we thought Gor Mahia are on the verge of glory; just when we celebrate their brilliance, a handful of fools out with their apelike agenda ruin the whole parade.

It is a pity that the â€˜Green Armyâ€™ is easily the best fan base in Kenya and at the same time, is eaten to the core with maggots straight from the Jurassic era; a militia that has no inkling of what really takes it to the stadium; a posse so rotten such that it wishes to spread its malignant bacteria upon the face of the whole society.

It is a den of irrational beings who seek to take advantage of a crowd to hide its own internal frustrations whether they are individual or collective band of idiots. Time and again the group has acted as if it is some occupying army that knows neither law nor humanity.

We have documented cases of narrow foreheads attacking hawkers in markets on their way to the stadium; we have noted a group that only seeks disorder; an assemblage that at best was left in the primeval forest from whence humanity evolved; a cluster that has only developed physically but whose brain is tabula rasa; a shameless crowd.

How many times shall we be put in the position of spewing vitriol upon such a throng? For how long must the whole country whisper saying: â€œthere go the fools.â€ It is a worrisome trend and the rotten core of Kâ€™Ogalo must be uprooted even though its roots be at the heart of the club.

During the GOtv Shield semi-finals at the Moi International Sports Centre, Kasarani, Gor Mahia were playing Sony Sugar. The match was theirs and all knew the same. They won in the end on post-match penalties and instead of celebrating their win, the goons unleashed terror on Sony players and officials.

Their main targets were Sony custodian Wycliffe Kasaya and defender Andrew Waiswa, who suffered serious head injuries. Sony team doctor, Mark Chinda, said the two will need a month to heal. Osuyaâ€™s only â€˜mistakeâ€™ was saving a penalty in regulation time, which angered the â€˜Green Armyâ€™. Ooh no, no goalkeeper is supposed to save a penalty against Gor Mahia; the rowdy â€˜Green Armyâ€™ will come after you!

Other Sony players affected were Moses Arita, Steve Biko, Charles Odete and team manager Paul Olik. How can even a base person as Adolf Hitler ever stoop to that level? Of what aid was that folly to Gor Mahia as a team?

We assume some of their fathers are hissing in dark corners: â€œGigoye… (Theyâ€™ve punished him)â€ and are thrilled by the fourth generation stupidity. They may be getting high-fives from their peers but they are just a dim lot that will block the team from ever rising to its intended greatness. Their action was, is and shall be forever unacceptable to civilisation.

This man Bukulu, like Gado cartoonist, is bitter. In his arduous task of unmasking the Green Army, he misrepresents a few facts, exaggerates others and outlandishly goes on personal vendetta against the young Luo men-the Green Army

Let’s face it. Gor Mahia, like ODM party, gets its near fanatical support from Luos. Unlike the party, the club’s fan base is composed of the young ones: the youths, or should I say the jobless youth?

Gor goons are incomparable to Adolf Hitler. Yet both Bukulu and Cartoonist Gado has recently made such outrageous comparisons with no mush thinking.

It is often sad whenever writers cannot get the correct historical events to make modern comparisons on. In fact, to use Hitler, Bukulu detoured very far. He would have said Gor fans stooped to low like KDF forces in a Westgate operation. Homegrown example. Very modest.

Let me teach Bukulu a few things Otis, my next door neighbour, told me about hooliganism.

My friend does not hide the fact that most of his friends, the bulk of the Green Army, are a frustrated lot. There frustration has nothing to do with putting food on the table or having an Equity Bank account. Their anger is perverted desire for respect!

Now, this is getting organic chemstry-ish. How can hooliganism be a call for respect? How can the noise and and violence that often ensue be a desire to gain societal respect? He told me thus.

“You see Okuyu, we are supporting Gor for a reason. You people are taking us for granted. You steal elections, you don’t want to to the Hague. You are firing us from government. . .blah blah blah” I stopped him. I knew the rest. It was not the first time we were having that conversation. Any Kikuyu who is a friend to a young Luo will tell you that that kind of dialogue is a must!

This is what Bukulu missed. A Gor Mahia fan is not bothered by the outcome of the game. In fact, the outcome only adds to the gist of the whole ritual. Supporting Gor Mahia is away of venting anger. It is how my friends reveal the pain of December 27, 2007 and March 4 and the day of Mutunga! To tell them to stop, without adequately responding to all these pent-up anger and frustration and the dwindling community numbers in Â Uhuru’s bureaucracy is to go hug a transformer! It will not happen!

I may be wrong, but a true Green Army soldier will share with you these same sentiments. From the Bensouda songs to the perverted Christian songs to the creation of Giniwasekawo (whose origin is traceable to the 2007 race before it got elongated for the Premeire League) and other such rebellious rants, the Green Army is a walking indictment of the double standards in the body politic of this country.

So I tell the haters: deal with it! I derive more fan from my lake side brothers just as I enjoy the current good harvests in the House of Mumbi!

Here is the tip: If you feel your business is at risk during Gor Mahia weekends or weekdays, close it up. Better still, buy the Gor Mahia jersey and the flag and anything that can identify your business with the hooligans and suffer the inconvenience of a few hours.

In and out of the pitch, I like the hooligans. I adore their messages and when my schedule is not fixed, I will never hesitate to put my jersey. 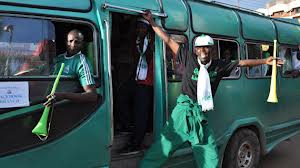