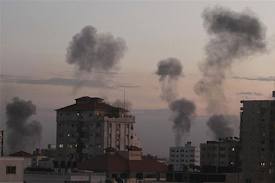 The Israeli cabinet has authorised the call-up of 75,000 reserve troops as fears grow that the prime minister, Binyamin Netanyahu, will order a ground invasion after Egyptian efforts to broker a ceasefire did not make headway and Hamas fired a rocket at Jerusalem.

The US was scrambling to prevent a further escalation of what it described as a "very, very dangerous situation" in Gaza. Britain warned that a ground invasion could cost Israel international support.

But concerns that Netanyahu is preparing to escalate the assault were strengthened as he held a strategy session with senior ministers. Also, the size of the call up is on a scale comparable to Israel’s invasion of Lebanon six years ago, and several times larger than the number of reservists drafted during the last major incursion into Gaza in 2008. Tanks were seen gathering near the Gaza border, and roads in the area were closed to Israeli civilians.

Israel’s deputy foreign minister, Danny Ayalon, told CNN that a ground invasion could come before the end of the weekend if the rocket attacks continue.

"We don’t want to get into Gaza if we don’t have to. But if they keep firing at us â€¦ a ground operation is still on the cards," he said. "If we see in the next 24 to 36 hours more rockets launched at us, I think that would be the trigger."

Hamas, the Islamist group that runs the Gaza Strip, said Israeli planes early on Saturday bombed the office building of Prime Minister Ismail Haniyeh where he had met on Friday with the Egyptian prime minister. An Israeli military spokeswoman confirmed the strike on Haniyeh’s office, according to the Reuters news agency.

Israel said it had struck more than 800 targets in the Gaza strip, with 180 air strikes over Friday night and Saturday morning. Gaza officials said about 500 rockets had been launched so far at Israel, according to Associated Press.

The Gaza interior ministry reported that before dawn on Saturday missiles hit two Hamas security facilities as well as the Hamas police headquarters in Gaza City, setting off a blaze that engulfed nearby houses and cars.

The interior ministry said a government compound was hit as people arrived for early morning prayers.

A three-storey house belonging to the Hamas official Abu Hassan Salah was also destroyed early on Saturday, Reuters reported. Rescuers said at least 30 people were pulled from the rubble.

In southern Gaza, Israeli aircraft went after the hundreds of underground tunnels used to smuggle in weapons, fuel and food from Egypt, people in the area reported. An explosion in the area sent buildings shuddering in the Egyptian city of El-Arish, 30 miles (45km) away, an Associated Press correspondent there reported.

Six people, including five militants, were killed and dozens wounded in the various attacks on Saturday, Gaza health official Ashraf al-Kidra said. In all, up to 40 Palestinians including 13 civilians and three Israeli civilians had been killed since the Israeli operation began, according to AP. Palestinians said their dead included at least eight children and a pregnant woman.

Neither side appeared to be attempting to pull back as Israel killed a commander in the Hamas military wing, Ahmed Abu Jalal. Militants in Gaza kept up rocket attacks, including the firing of one Hamas said was aimed at the Israeli parliament in Jerusalem which fell several miles short of the city. Israeli officials called that attack an "escalation".

Jerusalem is about 50 miles from Gaza â€“ the maximum reach of the most powerful rockets in the Hamas arsenal.

As stakes in the conflict rose for the third day, the IDF said about 550 rockets had been fired from Gaza since the start of its military offensive against Gaza, called Operation Pillar of Defence, on Wednesday. A third of the rockets were intercepted by its Iron Dome defence system.

The Israelis hit more than 600 targets in Gaza over the same period. Eighty-five targets were hit in 45 minutes in the early hours of Friday morning in one of the most intensive periods of bombardment since the offensive began.

Tunisia’s foreign minister, Rafik Abdesslem, arrived in Gaza on Saturday to show solidarity and denounce the Israeli attacks. "What Israel is doing is not legitimate and is not acceptable at all," he said. "It does not have total immunity and is not above international law."

Washington moved on Friday to try to prevent a further escalation. The White House said Barack Obama spoke to Netanyahu and the Egyptian president, Mohamed Morsi, about de-escalating the violence while reiterating his support for Israel’s right to defend itself. The president also spoke to Recep Tayyip ErdoÄŸan, the prime minister of Turkey, in the hope he could influence Hamas.

But attitudes appeared to be hardening in Egypt where the president, Mohammed Morsi. denounced Israel’s attacks on the Gaza Strip as "a blatant aggression against humanity" and said Cairo "would not leave Gaza on its own".

While the White House said the president commended Egypt’s efforts to de-escalate the situation following the visit by its prime minister, Hesham Kandil, to Gaza on Friday, attitudes appeared to be hardening in Cairo, where Morsi denounced Israel’s attacks on the Gaza Strip as "a blatant aggression against humanity" and said Cairo "would not leave Gaza on its own".

In a statement which will increase western concern about strengthening anti-Israel sentiment in post-revolutionary Egypt and elsewhere in the Middle East, he added: "Egypt today is not the Egypt of yesterday, and Arabs today are not the Arabs of yesterday."

Kandil reiterated the message during a short visit to Gaza aimed at showing solidarity with the people. "The Egyptian people are supporting you. The Egyptian revolution will be side by side with the Palestinian people. The world should take responsibility in stopping this aggression," said Kandil.

Their comments came amid growing public anger in Egypt over Israel’s military operation targeting Gaza, which was condemned in speeches in mosques and demonstrations. Protesters marched in the country’s two largest cities, Cairo and Alexandria, waving Palestinian flags and chanting slogans against Israel.

Preaching at the al-Azhar mosque in Cairo, the prominent cleric Yusuf al-Qaradawi, who was long barred from Egypt, likened Israel’s attack to Bashar al-Assad’s use of violence in Syria. "We say to the tyrant Israel, the day of your end is coming soon," he told a crowd, some of whom were wearing Palestinian scarves or carrying banners.

Other voices were more nuanced, reflecting the deep conflicts that many Egyptians feel in their country’s relationship with Israel, with which it signed the Camp David peace treaty in 1979.

Under former leader Hosni Mubarak, Egypt had become used to acting as a mediator between Palestinian groups â€“ including those in Gaza â€“ and Israel, a role the new Muslim Brotherhood-led government has continued to pursue, despite promising to take a harder line. Following the assault on Gaza, there has been evidence that the Brotherhood is being forced to be more assertive.

The crisis over Gaza is the first major foreign policy challenge for Egypt’s Islamist administration, which is complicated by the Muslim Brotherhood’s close historic ties with Gaza’s ruling Hamas movement.

Since the Egyptian revolution, the Brotherhood has been in a political bind over its treaty with Israel, coming under pressure from more radical parties, such as the Salafist al-Nour party, and secular leftwing groups to get tougher with Israel.